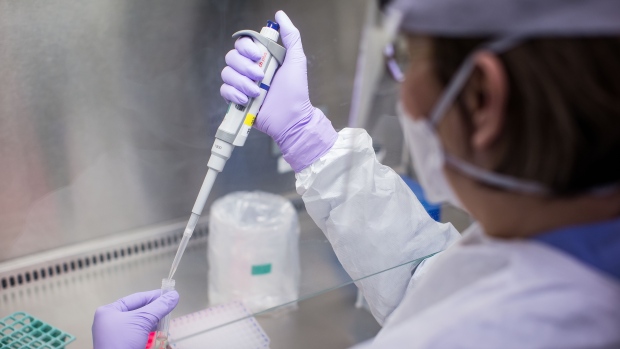 Katie Kempton, a laboratory technologist at LifeLabs, demonstrates one of the steps taken when a specimen is tested for COVID-19 at the company's lab, in Surrey, B.C., on March 26, 2020. (CANADIAN PRESS/Darryl Dyck)

Ontario reported 111 new COVID-19 infections and one new death on Tuesday, as a large portion of the province prepares to enter the final stage of reopening on Friday.

The number of patients who recovered from infection rose by 122, meaning the province’s overall active cases declined by 11.

There are now 1,442 active cases in the province, with 32,785 recovered patients and a total of 2,723 centrally-reported deaths.

As a large swath of Ontario resumes activities such as indoor dining and gymnasium exercise on Friday, epidemiologist Dr. Isaac Bogoch said it is likely the province will see new clusters of cases as a result in the future, like other countries that resumed most activities.

“All of them have had outbreaks – and some of them were significant enough that they had to clamp back down,” he said.

But he said it is reasonable that activities should be allowed to resume, given that many of these areas have “zero to few” active cases of COVID-19.

Peel Region added 38 cases on Tuesday but all but one of those cases were located in Brampton.

In a message posted to Twitter, Mississauga Mayor Bonnier Crombie said that the one new cases reported in her city represents the lowest number in any 24 hour period in nearly four months.

Provincial labs completed 16,744 tests, with a further 13,918 under investigation.

The tests completed generated a positivity rate of 0.66 per cent.

Across the province, 137 people were admitted to hospital for treatment of COVID-19 symptoms, up from 130 on Monday.

Of those, 30 patients were in intensive care units.

Of those 30, 21 were breathing with the help of a ventilator.