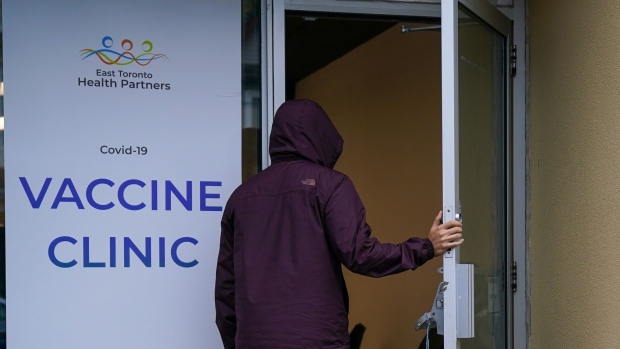 Provincial health officials logged 269 new infections today, down from 326 on Monday and from 328 a week ago.

Tuesday is also the fourth straight day of daily declines as 492 cases were logged on Friday, 373 on Saturday and 370 on Sunday.

The notable day-over-day drop in infections lowered the seven-day rolling average to 364, compared to 407 a week ago.

So far, more than 87 per cent of eligible Ontarians have received one dose of a COVID-19 vaccine and over 83 per cent have received two doses and are considered fully vaccinated.

Children under 12 years old are not yet eligible for a vaccine.

Another 427 people recovered from the virus in the past 24 hours, resulting in 3,051 active cases across Ontario, compared to 3,135 active infections a week ago.

Five of the deaths reported today occurred in the last month and one happened more than a month ago, according to the Ministry of Health.

Ontario labs processed more than 21,800 tests yesterday, producing a positivity rate of 1.5 per cent, unchanged from a week ago, the ministry says.

In the Greater Toronto Area, Toronto reported 39 new cases, while 36 were logged in Peel Region, 13 in York, seven in Halton and four in Durham.

Meanwhile, 27 cases were reported in Windsor-Essex and 21 were logged in Niagara.

The ministry says there are 233 people with the virus in hospitals across the province and 138 in intensive care units.

At least nine ICU patients were transferred here from Saskatchewan, where hospitals are near collapse due to COVID-19 admissions.

A confidential memo from the Ontario COVID-19 Critical Care Command Centre obtained by CP24 says the province could accept another 14 ICU patients from Saskatchewan over the next few days.

On Monday, capacity limits were lifted in most settings where proof of vaccination is needed, including gyms and restaurants.

By Jan. 17, the government plans to remove capacity limits in settings where proof of vaccination is not required, depending on the COVID-19 situation.

The government is aiming to lift all public health measures, including mandatory masks indoors, by March 28 unless it’s deemed unsafe.

“That is ludicrous. It is working against their stated purpose of trying to get as many people vaccinated as possible. We have no idea what is going to happen and you shouldn’t set timelines for a biological problem,” Warner told CP24 on Tuesday.

“I understand you want to give people hope but if people just have to hold on for 10 weeks and then the vaccine certificates disappear, that really works against their effort to try to get at least 90 per cent of eligible people vaccinated,” he added.