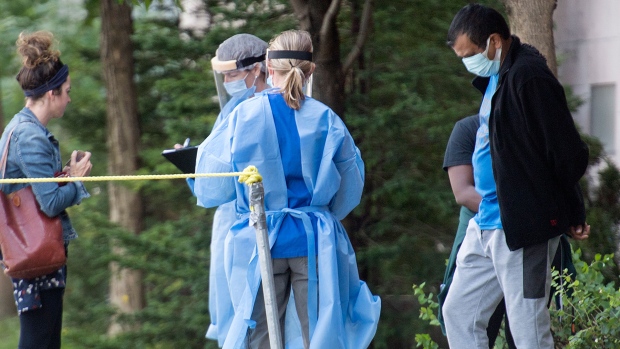 A health-care worker talks with people outside a COVID-19 testing clinic in Montreal, Monday, September 7, 2020, as the COVID-19 pandemic continues in Canada and around the world. THE CANADIAN PRESS/Graham Hughes

Ontario is reporting a drop in new COVID-19 cases today with a little more than 300 new infections confirmed over the past 24 hours.

Provincial health officials recorded 335 new cases of the virus today, down significantly from the 478 reported one day earlier.

The dip comes after Ontario reported more than 400 new cases for four out of the past five days.

The province conducted more than 35,000 tests over the past 24 hours, bringing the case positivity rate to 0.96 per cent, down from 1.4 per cent on Tuesday.

The province’s seven-day rolling average now stands at 386, up from 243 one week ago.

While new cases continue to outpace resolved ones, 258 additional recoveries were logged today.

Cases continue to climb in Toronto, Peel Region, and Ottawa

The highest number of new cases continues to be reported in Toronto, Peel Region, and Ottawa, which saw 102, 79, and 65 new cases today respectively.

The three regions have seen infections rise rapidly over the past two weeks and the concerning case numbers have prompted the premier to roll back the size of private gatherings provincewide from 100 outdoors and 50 indoors to just 25 outside and 10 inside.

According to the province's latest epidemiologic summary, nearly 70 per cent of all new cases involve people under the age of 40 and many new cases have been linked to private social events, such as weddings and large parties.

"We are starting to see some outbreaks in these long-term care facilities and we just know how devastating it can be," he said.

"I really hope we've learned our lesson about how to protect the most vulnerable amongst us. And certainly we know that in Canada sadly we didn't do very well protecting our family, our friends, our neighbours in long-term care facilities. That accounted for roughly 80 per cent of the deaths in Canada."

Data from local public health units indicates that the total number of virus-related deaths in the province now stands at 2,849.

Number of hospitalizations has doubled since last week

According to centrally-reported data, 88 people are currently hospitalized with COVID-19 in Ontario, double the number of patients receiving care in hospitals just last week.

The number of patients in intensive care is now at 24, up from 20 seven days ago.

Information from local public health units and hospitals puts the number of COVID-related hospitalizations in Ontario at 103.

In an effort to combat the second wave of the virus, Premier Doug Ford announced Wednesday that select pharmacies across Ontario will be offering COVID-19 tests to asymptomatic people by appointment only.

One day earlier, the premier announced that to manage the strain on the health care system this fall and winter, Ontario is ramping up its flu shot vaccination program by ordering more than five million doses of the flu vaccine, 700,000 more than were ordered last year.

"With the number of cases on the rise, it is clear that the next wave, it will come at us harder than the last one," Ford said on Tuesday afternoon.

"It will be more challenging than before because the flu season is starting soon and people are heading indoors again."