The coronavirus pandemic continues to hang new debt on Ontario’s back, with the Ford government adding $99.8 billion worth of deficit spending over the next three years to keep the healthcare system primed, cut taxes for business and hand out more cash to parents and seniors.

As it has at the federal level, the coronavirus pandemic has completely shredded the Ford government’s plans for a balanced budget, with both the deficit and the net debt hitting historically high levels this year.

The Ford government’s 2020 plan includes a new tax credit for seniors to renovate their homes, more cash payouts for parents of young children, a raft of tax new cuts for business and a vague pledge to allow Ontarians to claim 20 per cent of the cost of a vacation taken inside the province in 2021.

It also includes $570 million more to fund hospitals, over and above what was announced in the fall.

Here are some of the other highlights from the budget

“This is a great, great news budget for the people of Ontario, the businesses of Ontario,” Premier Doug Ford said Thursday. “You can sit there and say we are helping everyone, right across the province.”

The province will spend $187 billion this fiscal year, with $12.5 billion spent to service interest charges on the debt.

The Ministry of Finance says growth will rebound by 4.9 per cent next year and 3.5 per cent in 2022, but cautions that private sector economists are all over the map when it comes to charting Ontario’s rebound.

Even after spending billions to bolster hospitals during the first wave of coronavirus and another $2.8 billion for the second wave, the budget revealed there is still $2.65 billion left over in contingency funds for this fiscal year. 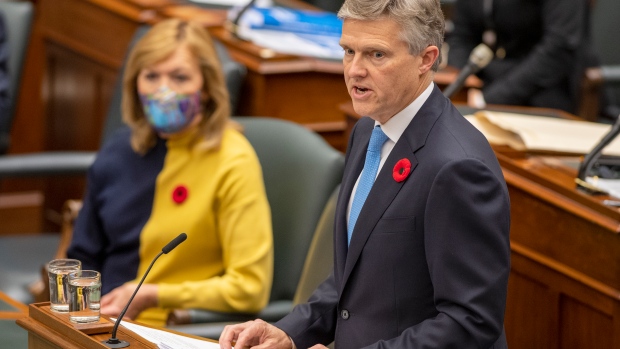 Minister of Finance Rod Phillips said he was comfortable leaving that money aside for when new COVID-19 related problems arise, when reporters and the opposition asked why that money could not be used to expand testing or reduce classroom sizes.

“I am comfortable with that because we are still five months left in this year – it’s important we have those dollars available so that we can adjust – we’re in the middle of a second wave,” he said. “Those dollars will get spent and deployed and will be there to ensure people have the resources they need; the healthcare resources, the educational resources.”

NDP Leader Andrea Horwath said the budget amounts to the Premier “waving the white flag” at the coronavirus pandemic.

“There’s not much help, if any, for working folks and families in this budget,” she said. “I guess he thinks COVID-19 is over because this is a budget that sits on a lot of money.”

Sometime before Christmas, the government will offer every parent of a child up to the age of 12 another $200 payment, similar to what was done in March.

Parents of children up to age 21 with special needs will get $250. The move will cost taxpayers $380 million.

Major hydro users in the commercial and industrial sector will get $1.3 billion worth of rate reductions over the next three years.

In addition, the Business Education Tax rate most businesses will pay is going down to 0.88 per cent and the employer health tax payroll exemption will rise to $1 million costing taxpayers a combined $810 million.

Ford defended the decision to cut various costs for business while including no tax reductions for households, saying businesses were fleeing to the United States.

“As (businesses) were leaving out the door a while ago – they were saying ‘how can we be competitive with the electricity costs here in Ontario’,” Ford told reporters.

The province will spend $6.2 billion subsidizing hydro rates for people and businesses this year, up from $2.8 billion in 2018.

Horwath scoffed at the lack of additional funds for education and local public health units in the budget.

“He’s leaving 30 kids packed into classrooms; he has chosen to give no new money for public health,” she said.

A new program will pay for 25 per cent of the cost of home renovations for seniors, up to a maximum of $10,000. A similar program ended by the Liberals in 2016 only covered 15 per cent of costs.

Elsewhere, Ford is doubling the size of the Black Youth Action Plan, adding $60 million in funding over the next three years.

The tourism and cultural industry is also getting $125 million in new assistance.

To further boost tourism in 2021, the government has set aside $150 million for the “Year of the Staycation in Ontario.”

It would see 20 per cent of Ontarians’ eligible travel costs reimbursed by the province, provided they take a vacation within Ontario.

Officials speaking on background say the exact parameters would have to be worked out after consulting with the travel industry.

“We wanted to let the tourism sector know we are there for them,” Phillips said of the tax credit. “We will need to coordinate that with public health but it will be a powerful tool.”

The Ministry of Finance says that if growth accelerates in 2021, the amount of new debt added could shrink to as little as $87.5 billion over the next three years.

But if growth slows under the weight of a new widespread lockdown or other unforeseen circumstance during that time, the amount of new debt added could balloon to $107.5 billion.

Both Horwath and Del Duca also criticized the government for not including any cost details of the new promise to increase the standard of care in long-term care homes to four hours of care per day in the budget document.

Phillips said they are still working on the numbers and will have more information about costs associated with the plan when consultations with the industry finish in December.

They also slammed the Ford government for not making available $300 million in aid for businesses in Peel, York, Toronto and Ottawa forced to close in October due to the reintroduction of Stage 2 coronavirus measures.

Ministry of Finance staff say applications for the $300 million assistance package will open no later than Nov. 16.

It says the average COVID-19 test – both the collection of the specimen and processing – cost Ontario $48 each in the fall.

It also announces an innovative new program to detect prevalence of the virus will be expanded across the province.

The Ford government is spending $12 million to activate wastewater detection of the coronavirus, after an Ottawa project successfully tracked the prevalence of the virus in effluent discharge this fall.

The budget also calls for an “Emergency Volunteer Unit,” to be formed to recruit people to help for future natural disasters or public health crises.

While the COVID-19 pandemic has forced the closure of most provincial casinos and impacted the earnings of the lottery system, it also has a lot more people buying marijuana.

The budget shows that while the profit of Ontario Lottery and Gaming Corporation fell more than 90 per cent, from $2.3 billion to only $200 million this year, cannabis sales are growing exponentially.

Ontario Premier Doug Ford carries the Ontario Budget as he arrives in the Ontario Legislature in Toronto on Thursday November 5, 2020. THE CANADIAN PRESS/Frank Gunn