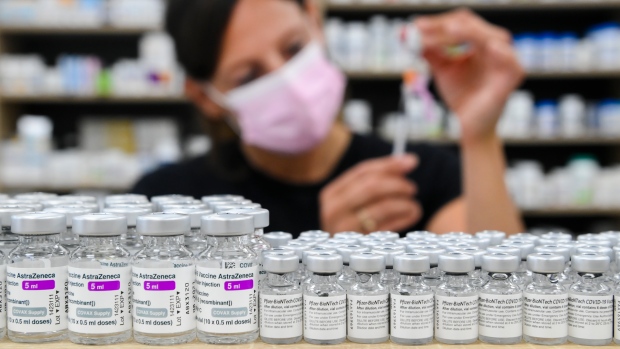 Barbara Violo, pharmacist and owner of The Junction Chemist Pharmacy, draws up a dose behind vials of both Pfizer-BioNTech and Oxford-AstraZeneca COVID-19 vaccines on the counter, in Toronto, Friday, June 18, 2021. THE CANADIAN PRESS/Nathan Denette

Starting Monday, most Ontario residents 18 years of age and older will be eligible to book an early second dose of a COVID-19 vaccine, the province announced Friday.

As of June 28 at 8 a.m., anyone 18 and over who has received a first dose of an mRNA vaccine will be eligible to receive their second dose ahead of schedule.

According to the province, the move will accelerate second dose eligibility for around 1.5 million people.

Those who received a first dose of AtsraZeneca became eligible to book a second dose appointment as early as eight weeks apart on June 14.

As of June 26 at 8 a.m., youth aged 12 to 17 who live in a Delta hotspot will be eligible to book an accelerated second dose through the provincial booking system, public health unit booking systems and pharmacies.

The province will look to accelerate second dose appointments for youth in all other regions after those 18 and over have received second shots.

“Ontario’s vaccine rollout continues to pick up speed, allowing us to provide more second doses ahead of schedule while supporting our communities most at risk,” Health Minister Christine Elliott said in a statement. “All vaccines provide strong protection against COVID-19 and the Delta variant, and I encourage everyone to book your second dose appointment as soon as possible.”

In late May, the province set itself a target of expanding early second dose appointments to everyone by August 9.

The move comes as Ontario receives millions of vaccine doses and prepares to move to Step 2 of the provincial reopening plan on June 30.

On average, Ontario has administered more than 202,000 vaccine doses per day between June 14 and June 24.

More than 76 per cent of Ontario adults have received a first dose so far and Ontario has received millions of vaccine doses this month alone.

Moderna, which until several weeks ago had delivered small and sporadic shipments, suddenly came through with about 3 million doses for Ontario in the later part of June.

At the same time, Pfizer hit its first delivery snag in months, delivering a shipment of close to 1 million doses several days late. That prompted some jurisdictions like Toronto and Peel to switch to a mix-and-match strategy for mRNA vaccines in order to avoid vaccination delays.

Health officials have said that while there have not been any published studies specifically examining mixing the Pfizer and Moderna vaccines, general vaccine science indicates that the two should be interchangeable, with similar efficacy and safety.

Officials have advised that people should take the first shot that becomes available, regardless of brand, as two doses greatly improves protection against the more infectious Delta variant.

The province is also trying to ensure that there are enough Pfizer doses to vaccinate those between 12 and 17, for whom Pfizer is currently the only approved vaccine.

While Ontario has received the delayed shipment of Pfizer this week, the federal government has indicated that more delays are expected from the company in July.

Overall, the province is still expected to receive 3.54 million doses of Pfizer next month.

In the meantime Toronto reported Friday that the city has now fully vaccinated 35 per cent of its residents.

The city is also aiming to boost that number in a big way with a massive one-day pop-up at Scotiabank Arena this Sunday through a partnership with MLSE. The “Our Winning Shot” popup clinic is by appointment only and is expected to vaccinate 25,000 people in a single day, which would set a new North American record.

Participants will get free rally towels to mark the occasion, as well as a chance to win Raptors or Maple Leafs tickets.