Ontario sending coronavirus test swabs to U.S. for processing due to massive backlog 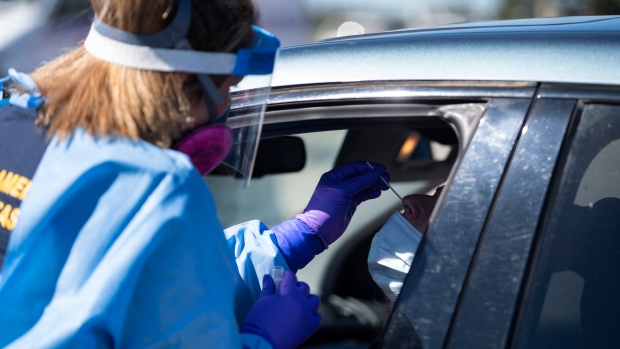 The Ontario government has confirmed it is sending some COVID-19 tests to the United States for processing amid a backlog at the province’s medical laboratories.

The confirmation from a spokesperson at the Ministry of Health comes a day after Premier Doug Ford acknowledged that the province is reaching its limit when it comes to testing for COVID-19 during Ontario’s second wave of the disease.

“Testing is a key pillar in Ontario’s fight against COVID-19. As Ontarians expect, all options are on the table to quickly identify cases and contain the spread,” the spokesperson said.

“This includes working with third party providers, such as Quest Diagnostics, to process more tests and achieve provincial testing targets.”

Based in New Jersey, Quest Diagnostics is one of the largest testing chains in the U.S. and has outposts in Mexico, Ireland and India. There are no Canadian locations.

On Monday, Ford said his government has been working with universities and private laboratories to bolster the province’s testing capacity. The premier made the comments as Ontario recorded a backlog of approximately 68,000 tests for the disease.

“We have an issue with getting enough diagnostic lab technicians, we're reaching out right across the province,” Ford said. The premier did not disclose that he was looking south of the border for help in processing tests.

Testing for COVID-19 has been a hot topic throughout the pandemic as experts and medical officials agree it is one of the most crucial tools in identifying, tracing and containing the disease.

Ontario residents who want to be tested for COVID-19 are now required to make an appointment, putting an end to walk-ins at the province’s 153 assessment centres.

Infectious Disease Specialist Dr. Isaac Bogoch said that while an appointment-based system may have drawbacks, it also may help in more effective testing.

“We know that a system like this can really ensure that people who have symptoms or exposures or risk factors are prioritized for a test. We also know that this will help with the lineups and we'll help with the tremendous backlog,” Bogoch said.

A little more than 38,000 tests were conducted in Ontario over the last 24-hour period.

In September, Florida Governor Ron DeSantis ordered all of the state’s executive agencies to “sever their COVID-19 testing relations” with Quest Diagnostics over what the Florida Department of Health described as a reporting of “stale data.”

According to the Associated Press, the company failed to submit timely results of 75,000 COVID-19 test results, some dating as far back as April.

“To drop this much unusable and stale data is irresponsible and Quest has abdicated their ability to perform a testing function in Florida,” the department of health said in a tweet published Sept. 1.

At the time, DeSantis called the company’s failure “egregious” and raised further questions, he said, about the reliability of testing data for making policy decisions.

Quest would later apologize for the delay in reporting, pointing the finger at “technical issues” that have since been resolved.

“We apologize for this matter and regret the challenge it poses for public health authorities in Florida,” the company’s statement continued.

A month earlier, Quest Diagnostics stated it could no longer keep up with the testing demand in the U.S. while adding that most patients could face waits of a week or longer for results.

To resolve the issue, Quest went as far as urging local health care providers to cut down on tests for low-priority individuals, including those without symptoms or any contact with someone who has tested positive for COVID-19.

With files from the Associated Press, Katherine DeClerq, Melissa Myers and Shawn Jeffords.