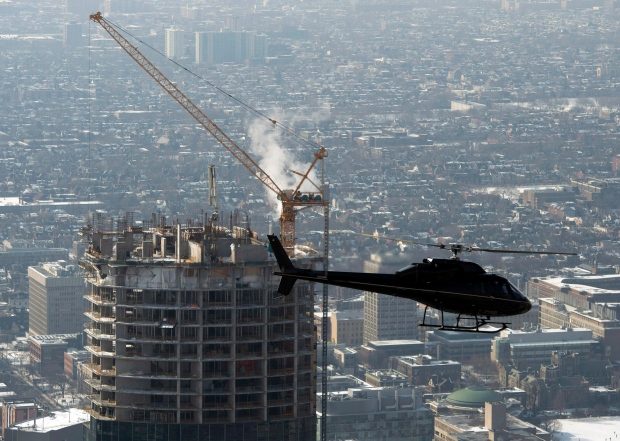 An Airbus Helicopters AS355 flies past the Aura condominium, under construction in Toronto on Tuesday February 4, 2014. THE CANADIAN PRESS/ Frank Gunn

TORONTO -- The 1.3 million Ontario residents who live in condominiums will get a new, less expensive way to resolve disputes under proposed legislation to be introduced Wednesday.

The province will create a Condominium Authority to provide a range of services including dispute resolution, so condo owners won't have to go to court to clear up a disagreement with a neighbour or their condo board.

Consumer Services Minister David Orazietti told The Canadian Press that the Authority will be funded by fees paid by condo developers and by a $1 a month levy on individual condo owners.

It will provide advice for condo owners along with mediation services to resolve disputes such as noise complaints, bylaw infractions or an inability to get financial documents from the condo board of directors.

Orazietti says the costs of settling condo disputes should be reduced to hundreds of dollars instead of thousands of dollars, and will not need to involve expensive court time.

The province will also create the Condo Manager Licensing Authority to provide training and regulate the 2,500 people who manage the 10,000 condominium developments in Ontario, which have about 700,000 individual units.

Orazietti says right now there are no qualifications to become a condo manager, so a new licensing system will be introduced for individuals and for management firms, along with a new code of ethics.

About half of all new home sales in Ontario are condominiums, but the average buyer will find it difficult to digest all the legal documents surrounding one of the most complex -- and often the largest -- financial transaction in their life.

"For the average person, it's not a level playing field right now and our legislation will significantly strengthen consumer protection for condo owners," said Orazietti.

The changes to the Condominium Act will also tighten the rules to avoid surprise hikes in condo fees. Some developers put clauses in contracts that allowed them to own common areas such as the lobby, and would lease those areas back to the board in the second year, triggering a big increase in monthly fees for owners.

"It's about clear language contracts that are transparent," said Orazietti. "The condo buyer will get a guide through the Condo Authority so they understand and know their rights, they ask the right questions."

There will also be new rules on how condo boards are run to make them more transparent and accountable, with new qualification requirements for directors that will require some basic training.

The changes will make it easier for individual owners to call for a vote of the condo board on an issue, and will require boards to issue reports to owners on a regular basis on topics such as insurance or any legal proceedings.

Regulations will be clarified to spell out the amount of an adequate reserve fund for each condo development, which should also help eliminate surprise hikes in fees or special assessments levied against each owner.

Existing buildings that are converted to condos, which were not covered by the Tarion new home warranty program, will now be eligible for limited coverage.