The minority Liberals plan to introduce legislation on Monday that, if passed, would ensure no Ontario generating station ever burns coal again once it's eliminated in 2014.

Ontario's Nanticoke generating station -- the largest coal-burning plant in North America -- is slated to close soon. Another station in Thunder Bay, Ont., is expected to switch to biomass over the next year.

With environmentalist and former U.S. vice-president Al Gore by her side, Wynne said the proposed ban isn't just a symbolic move in Ontario's fight against climate change.

"What's significant is that we're saying that we don't want to go back, we're not going to go back and that future government would have to change the legislation," she said.

"We believe that this puts a very clear line in the sand and is significant."

"Mother Nature is proclaiming the urgency of this crisis in ever more easily understandable tones," he said.

Natural disasters like the devastating typhoon in the Philippines are frightening signs of what's to come if governments don't take action to curb climate change, he said.

It was like the country was hit by a combination of the largest tornado ever seen and a tsunami, he said, much like the made-for-TV B movie "Sharknado."

"I don't mean to make light of it," he added. "What I'm trying to punch through is the wall of denial and resistance to seeing how dramatically the reality has changed in our world."

"We've got to wake up to it, we've got to do something to change our current course," Gore said. "And again, thank God for the people of Ontario providing such leadership."

But the minority Liberals still need the support of at least one of the opposition parties for the legislation to pass.

Progressive Conservative energy critic Lisa MacLeod said her party will look at the legislation before making any decisions.

She said she understands the affect coal has on people's health, having lived in a coal-mining town and a grandfather who mined coal.

It's taken too long for Ontario to shut down its coal-fired plants, she said.

The Liberals first promised to close the coal plants in 2007, then pushed back the timetable to 2009 and again to 2014.

They can't stick to any of their plans, MacLeod said. They cancelled two natural gas-fired plants before the last election, which will cost taxpayers around $1 billion, and have decided not to build new nuclear reactors.

They also handed generous subsidies to wind and solar power producers, she said. It's all driven up electricity bills.

"I think it's an inconvenient truth for them that while they've doubled our hydro rates because of poor planning, we have seen manufacturing jobs leave the province to the tune of hundreds of thousands," MacLeod said.

But Environmental Defence, which hosted Wynne's announcement with Gore, said the government is showing the world that bold action can be taken to fight climate change.

"Ontarians should feel proud to live in the first jurisdiction in North America that is kicking the coal habit, and we hope others follow this lead," said executive director Tim Gray.

And it said early coal closure at Lambton and Nanticoke will save the province's electricity customers about $95 million through reduced operating and maintenance costs. 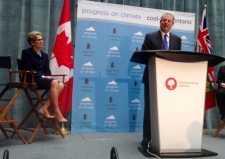