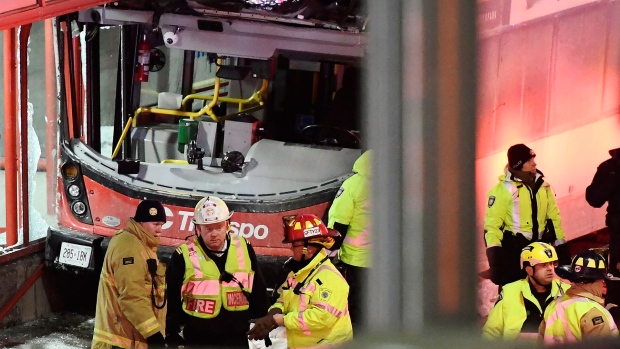 Police and first responders work at the scene where a double-decker city bus struck a transit shelter in Ottawa, on Friday, Jan. 11, 2019. THE CANADIAN PRESS/Justin Tang

Ottawa police are charging the driver of a city bus with more than three dozen offences after a deadly crash in January that killed three people and injured 23 others.

Aissatou Diallo was initially arrested and questioned after the incident at a transit station in the city's west end, but released without charges.

She is being released on a promise to appear at a court date scheduled for mid-September.

The double-decker bus, on an express route from downtown to the west-end suburb of Kanata, slammed into the roof of a shelter, cutting through the right side of its upper deck and crushing a number of seats.

Bruce Thomlinson, Judy Booth and Anja Van Beek, all civil servants working for the federal government, died in the crash that happened during a frigid Friday rush hour in the national capital.

Police initially ruled out impaired driving as a cause of the January crash, but said at the time that they were looking at everything else, including weather and road conditions.

The double-decker transit bus was travelling to Kanata's suburban Bridlewood neighbourhood from downtown Ottawa when it hopped a curb and struck the Westboro transit shelter at about 3:50 p.m., just as rush hour began. It plowed along a station platform and into the overhanging roof of the transit shelter.

Two people were thrown from the bus, and many of the injured survivors sustained injuries to their lower limbs and required amputations.

The municipality has also faced multimillion-dollar lawsuits as a result.