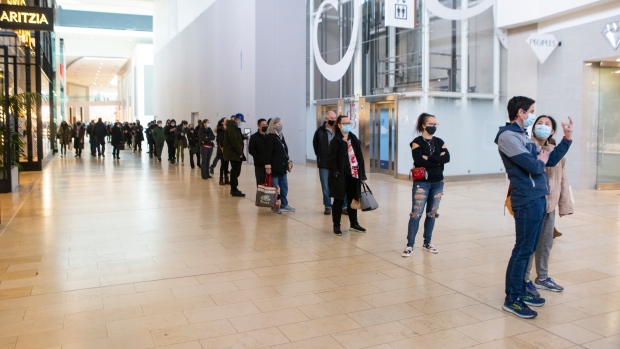 A lengthy queue snakes though Toronto's Yorkdale Mall as people wait to receive a free COVID-19 rapid antigen test kit at a pop up site at the shopping complex, on Thursday, December 16, 2021. THE CANADIAN PRESS/Chris Young

As COVID-19 cases in Ontario continue to climb and people prepare to gather over the holidays, the need for tests to detect the virus has never been higher.

And now, some people in the province appear to be cashing in on the demand: selling rapid antigen tests for hundreds of dollars online.

In several posts to sites like Craigslist, ads for packs of COVID-19 rapid antigen tests are selling for anywhere between $90 and $350 at time of writing.

On TikTok, at least one post appears to show someone who sold a BTNX Rapid Response COVID-19 Rapid Antigen Test—the same brand of tests distributed by the province for free—with the caption “just made 200 bucks” and “thx Ontario.”

The surge in demand for rapid COVID-19 tests was highlighted last week after people flocked to LCBO locations to pick up a free test in time for the holidays.

At least 100 LCBO retailers across the province took part in the government’s “holiday testing blitz” on Friday morning and distributed the rapid tests to residents for free.

By Friday evening, the LCBO announced that their supply had run out.

In an email to CTV News Toronto Saturday, Ministry of Health Spokesperson Alexandra Hilkene said the government recognized there is a “significant demand for rapid tests.”

“Ontario has a limited supply of rapid tests and every single test the province has received from the federal government is out the door to thousands of workplaces, hospitals, home and community care settings, long-term care homes, schools and child care centres on top of the many pop-up sites across the province,” Hilkene said at the time.

The value of the rapid test lies in the short time it can detect a positive result in a symptomatic person. In as little as 20 minutes, the person being tested can get their results, isolate immediately if positive, and then seek out a PCR test for confirmation of their diagnosis as is recommended by the province.

You can still book a rapid test for travel or if you are asymptomatic at pharmacies in Ontario for a fee of $30 to $40 and PCR tests are also available, though the turn around time for a result can be as long as four days.

A pop-up holiday schedule for rapid antigen tests is still in effect and a full list of locations can be found here.

The Ministry of Health could not be reached for comment on the apparent price gouging of rapid tests online.