Ontario Finance Minister Rod Phillips has resigned from his key role in cabinet over his secret vacation to a luxurious Caribbean island as the COVID-19 pandemic ran rampant in the province.

"Today, following my conversation with Rod Phillips, I have accepted his resignation as Ontario's Minister of Finance," Ontario Premier Doug Ford said in a statement.

"At a time when the people of Ontario have sacrificed so much, today’s resignation is a demonstration that our government takes seriously our obligation to hold ourselves to a higher standard," he said.

The Ajax MPP left for St. Barts, a tiny, 10,000-inhabitant island known as a hideaway for yachts and boutique luxury hotels, on Dec. 13, calling the decision a “dumb, dumb mistake.”

“It was a significant error in judgment – a dumb, dumb mistake, I apologize for it, I regret it,” he told CP24’s Steve Ryan at Pearson International Airport upon his return on Thursday morning.

He said that he could not really explain why he went ahead with the trip at the time that he did.

“I have been asking myself that same thing over the last number of days,” he said.

With his departure, Treasury Board President Peter Bethlenfalvy has been tapped to assume the role of minister of finance in addition to his existing duties.

He will be the Ford government's third finance minister in as many years.

"I know that important work will continue and I wish Minister Bethlenfalvy all the best as he takes on this additional responsibility," Phillips said in a statement released after his resignation was made public.

"I would like to thank my family, political staff and the officials at the Ministry of Finance."

His office released a plethora of tweets and Instagram posts during the time he was away, including one where he sat next to a gingerbread house and a glass of eggnog and thanked healthcare workers dealing with packed hospitals, as “we all make sacrifices this Christmas.” 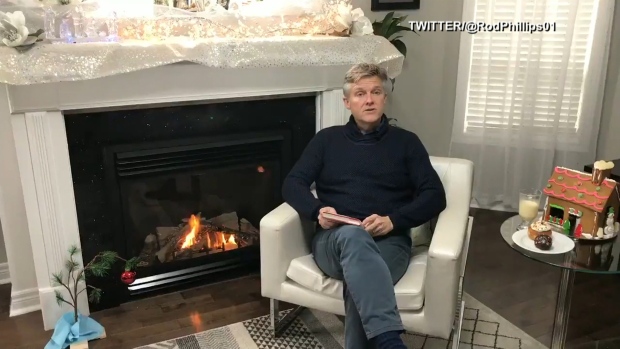 Many of the posts made it appear as if he was in his riding when he was not.

Phillips said it was not his intention to deceive anyone about the trip when he sent the videos, tweets and Instagram posts.

“I understand why some people believe that is the case but it is not – many politicians, in fact most politicians pre-plan and pre-load messages on social media,” he said.

But he said the messages may have made it look that way given where he was and he knows the public is upset.

“I do understand that I have angered many people – I have to work to regain their confidence.”

In a Zoom call Phillips participated in while he was away, first pointed out by the Ontario Liberal Party, the sound of the ocean tide crashing into the beach can be heard when he unmuted himself to speak.

.@RodPhillips01 are those waves we hear behind your Queen’s Park Zoom background? This is disgraceful, and Ford knew about it for two weeks. #onpoli

Ontario’s two top public health officials both expressed concerns about foreign travel at the time he departed for the vacation.

The federal government has also been warning Canadians not to embark on non-essential travel since early November.

Ford said Wednesday he wasn't told about the trip ahead of time, but did learn about it shortly after it began, and should have demanded Phillips return immediately.

Phillips said that he didn’t tell Ford about the trip because the Premier has better things to do.

“Premier Ford has far more important things to do than worry about the travel of his ministers,” he said.

Ford has said it's “unacceptable” for any public official to ignore the province's COVID-19 guidelines, which urge residents to avoid non-essential travel.

Phillips said earlier this week he chose to go ahead with the trip not knowing the province would be placed under lockdown on Boxing Day.

In an interview with CP24 on Thursday afternoon, Liberal Leader Steven Del Duca said that the incident is yet another example of the Ford government failing to “lead by example.”

“He clearly undermined the confidence that the people of Ontario had in him but there is a much bigger question for me and I think for everyone living in this province and that is the fact that Doug Ford has not held himself and his members of caucus and cabinet to the same level of accountability, not just in this case but all the way through this pandemic,” he said. “From Doug Ford going up to his cottage when he told the people of Ontario not to, him celebrating Mother’s Day with his family when he told the rest of us not to, his MPP Sam Oosterhoff from Niagara gathering without proper physical distancing and boasting about it on social media and now Rod Phillips.”

Ontario NDP leader Andrea Horwath also released a statement on Thursday in which she pointed out that Ford “knew about Rod Phillips’ trip to St. Barts two weeks ago.”

She said than rather than asking for Phillips resignation then, Ford “helped him keep the trip a secret.”

“Phillips’ resignation from cabinet today is not because of Phillips’ vacation, it’s because they got caught,” she said.

Phillips will remain in the Progressive Conservative caucus as the MPP for Ajax.

He will now self-isolate until Jan. 13.