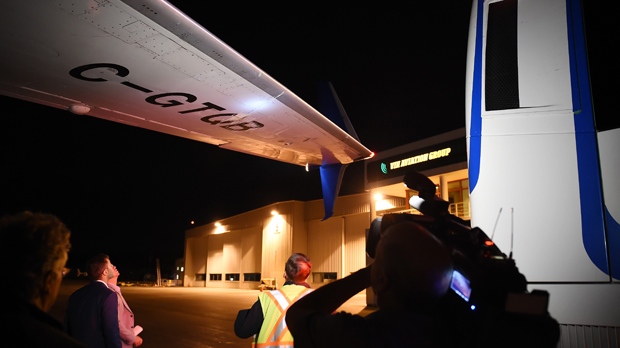 Members of the media inspect the wing from Liberal Leader Justin Trudeau's campaign plane after being struck by the media bus following landing in Victoria, B.C., on Wednesday, Sept.11, 2019. THE CANADIAN PRESS/Sean Kilpatrick

VANCOUVER -- Justin Trudeau's federal election campaign is ready to get off the ground -- again.

The Liberal re-election caravan will be taking wing later today after the party's chartered plane was damaged Wednesday night in a minor collision with a bus on the airport tarmac in Victoria, B.C.

A bus that was ferrying members of the media to a hotel for the night drove too close to the aircraft, causing visible damage to the underside of the wing.

Campaign officials now say a new Air Transat plane has been procured, although this one doesn't feature the partisan branding of its predecessor, which included Trudeau's name in big red block letters.

The Liberal leader has a packed itinerary today, including stops in Kamloops, Edmonton and Trois Rivieres.

One stop Trudeau is not making is in Toronto, where Conservative rival Andrew Scheer, NDP Leader Jagmeet Singh and Green party Leader Elizabeth May are gathering tonight for the first debate of the campaign, sponsored by Maclean's magazine and Citytv.