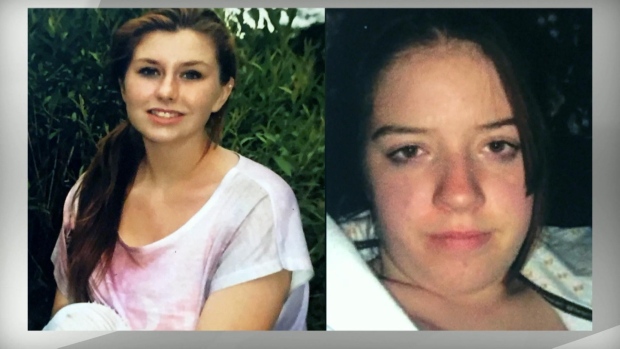 Rori Hache and Kandis Fitzpatrick are shown in a composite image.

OSHAWA, Ont. - The trial of a man accused of murdering and dismembering two young women got underway Monday in Oshawa, Ont., with a detailed description of a gruesome scene officers stumbled upon when two plumbers called them to a local home.

The plumbers had been hired by the tenants of the main floor apartment to unclog the drains, Crown attorney Bryan Guertin said in his opening statement.

“The plumbers pulled out what appeared to be a flesh-like substance,” he said. “The plumbers, unsure of what they found, called police.”

Outside the home, the plumbers showed Park a shopping bag with what he described as a “fleshy-like substance, maybe 13 to 14 inches long.”

“I'd never seen anything like this before so I wasn't sure,” the Durham Regional Police officer testified.

Four officers then went to the basement apartment, where a man opened the door.

Park said he asked the man what he was flushing down the toilet.

“OK, you got me, the gig's up, it's a body,” the man allegedly told the officer. “If you want to recover the rest of her, it's in my freezer.”

Adam Strong was arrested and charged with first-degree murder in the death of 18-year-old Rori Hache, who had disappeared months earlier. He is also accused of killing Kandis Fitzpatrick, 19, who vanished in 2008 and has not been heard from since.

Strong, 47, has pleaded not guilty to both first-degree murder charges.

Guertin said fishermen found a torso in the Oshawa Harbour on Sept. 11, 2017. After looking for missing persons and with the help of their families, they identified the torso as belonging to Hache.

“Mr. Strong was not on police radar until he was caught trying to dispose of Ms. Hache's remains,” Guertin said.

Data from Google will also show Strong's phone at the Oshawa Harbour a week earlier on Sept. 4, when he dumped Hache's torso, Guertin alleged.

When investigators showed up at Strong's apartment in December, they found the rest of Hache's body inside a large freezer in the man's bedroom, Guertin said. Her blood was on Strong's bedroom walls and ceiling, and his semen was found on her body, he said.

A medical examiner will testify that Hache had multiple injuries on her body, including two skull fractures, Guertin said. But the doctor could not discover a cause of death due to the state her remains were found in.

Kandis Fitzpatrick's DNA was found on that knife. Investigators also found her blood in Strong's freezer and in his bedroom.

The prosecution is putting forth a similar-fact application in an effort to show court Fitzpatrick died in the same way and by the hands of Strong.

“Both girls were vulnerable, were essentially homeless with no fixed address,” Guertin said.

“Both girls suffered from drug issues and sometimes worked in the sex trade to help fund their drug habit.”

Outside court, Shanan Dionne, Hache's mother, said the trial was not about her daughter being homeless or “a drug-addict toss away that wasn't loved.”

“Because she was so loved,” she said.

Michelle Guindon, Hache's aunt, said the two had spent considerable time together before the disappearance. She said she'd taken Hache to the dollar store to buy a pregnancy test.

The 18-year-old was pregnant at the time, Guindon said, but was also struggling with a crystal meth addiction.

William Fitzpatrick, Kandis's father, also testified. He said he last saw her in the spring of 2008 and has not heard from her since.

He said his daughter also struggled with drugs and would leave the family home for weeks at a time without word.

They launched a Facebook page to get the word out after several months without hearing from her. He said he looked for her in Oshawa and neighbouring cities without luck.

“Miss you, love you Kandis” William Fitzpatrick wrote on the page, which was shown in court.

He cried when he read the message aloud. Strong, a heavy-set man sitting in the prisoner box in a baggy white T-shirt and grey pants, with long, black hair pulled back in a ponytail, showed no emotion.

Strong's statement to the officer who showed up at his door as well as two subsequent videotaped interviews he had with police are subject to legal arguments in the next few weeks about their admissibility.

The prosecution said it has a strong circumstantial case that will rely heavily on the forensic examination of Strong's home and his digital devices.

The Crown said it will call five women to the stand who were allegedly the victims of sexual violence by Strong. They will testify about a “pully” contraption he used to bind and restrain them, the Crown said.