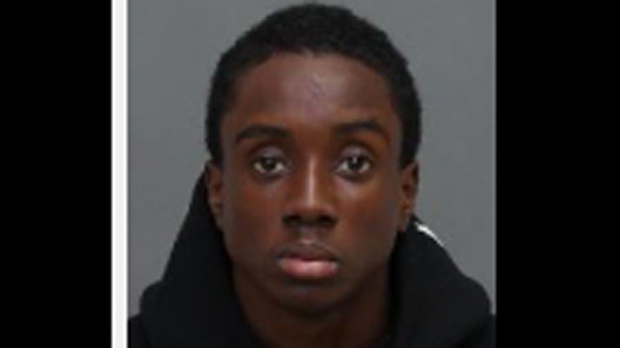 Jonathan McLennan, 27, is shown in a handout image. (YRP)

Investigators say they have arrested and charged a Toronto man seen in a security camera video threatening to kill a woman and dragging her by her hair off the porch of a Richmond Hill home last month.

At about 2:50 a.m. on Aug. 23, officers say a woman rang the doorbell of a home at High Tech Road and Silver Linden Drive, in the Bayview Avenue and Highway 7 area, but no one answered it.

A security camera positioned at the door captured a male suspect, carrying a handgun, approach the woman and threaten to shoot her in the head.

The victim repeatedly said ‘stop,’ but the suspect continued to grab her.

“I think I am going to die,” the victim said in the video before the male grabbed her by the hair and pulled her into a waiting SUV.

“I’m gonna kill you,” the male was heard saying before shutting the car’s door.

York Regional Police Const. Andy Pattenden says the female was not in any way associated to the home where she rang the doorbell and may have been going door to door looking for help.

Officers located the woman the next day and confirmed she was safe and in good health.

Investigators also released the identity of the alleged suspect that same day.

On Thursday, a suspect identified as 27-year-old Jonathan McLennan was arrested in Toronto.

He has been charged with nine offences including kidnapping with a firearm, forcible confinement, uttering threats, carrying a concealed weapon and pointing a firearm.

The vehicle used, identified as a 2017 Toyota RAV4, was located and seized.

McLennan appeared in court in Newmarket on Friday.

A female abduction victim is seen in a surveillance camera image. (YRP)

A suspect in a possible armed abduction in Richmond Hill is shown. (YRP)