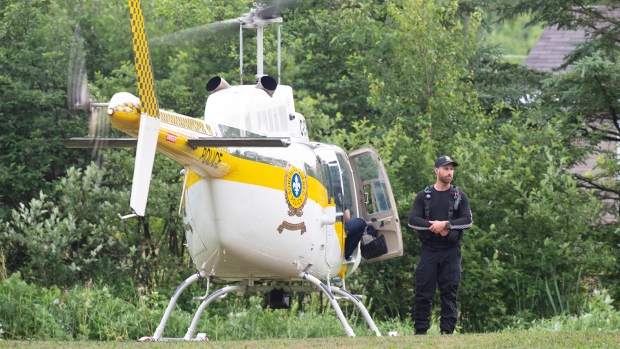 A police officer stands by the helicopter as they search on Saturday, July 11, 2020 in Saint-Apollinaire, Quebec. Quebec provincial police say two girls who were the subject of an Amber Alert have been found dead. THE CANADIAN PRESS/Jacques Boissinot

ST-APOLLINAIRE, Que. - Quebec provincial police continued their search Sunday for the father of two deceased girls who were the subject of an Amber Alert earlier this week, a case that has gripped a small town southwest of Quebec City.

The bodies of Norah and Romy Carpentier, aged 11 and 6, were found in a wooded area of a Quebec City suburb on Saturday.

On Sunday, the manhunt for the girls' father, Martin Carpentier, 44, had authorities tightening the search in the woods.

“That's our priority now, to locate him as soon as possible,” said Sgt. Ann Mathieu, a provincial police spokeswoman.

Residents had helped with the searches until Saturday, but police asked people to stay away from the area Sunday to let police work.

“We're still asking residents to be vigilant, but the best way to help us is to take a look at their own properties,” Mathieu said.

The provincial police have been omnipresent since Thursday, when the Amber Alert was triggered. The search shifted to a manhunt Saturday after the bodies of the two young sisters from Levis, Que. were found.

The attention of the entire province has been on the case, especially in the town of just over 6,000 where it's playing out.

Police have transformed the parking lot of a community centre into a base of operations and helicopters have been taking off and landing at a nearby soccer field.

Cedric Lambert, a native of St-Apollinaire, which is about a 30-minute drive from Quebec City, said he never imagined he'd see this type of deployment in his quiet little corner of the province.

“Seeing police everywhere, helicopters, you wouldn't have believed it,” Lambert, 23, said. “Then to know that they found the little girls here is stressful.”

His partner, Marie-Myriam Dion, a mother of two, said she doesn't feel safe.

Lambert was concerned Carpentier could represent a danger, given he's been missing since Wednesday and couldn't very well return to town to buy food.

One local described the area as a prime hiding spot.

Gerald Rousseau, a St-Apollinaire resident for 40 years, lives about four kilometres from where the police are searching. He said there's plenty of places to hide in the densely forested area.

“There are plenty of small chalets around there, cabins, sugar shacks, trailers,” Rousseau said. “It's a good place to hide ... people come down on the weekends, but there aren't a lot of people coming down given what's happening, so there's often food left behind inside.”

He also did as police asked and surveyed his own property.

“I turned my own property over, I didn't find anything,” Rousseau said.

Police have said the girls and their father were believed to have been in a car crash on Highway 20 in St-Apollinaire on Wednesday evening.

But police did not find any occupants inside the car when they arrived.

Lambert and Dion had joined the search on Saturday, criss-crossing the wooded area by car before the sisters' bodies were found, with autopsies to determine the cause of death still pending.

Those roads were closed Sunday as provincial police asked local residents to steer clear of the search area, saying their presence in the area on Saturday evening while acting on a tip was hindering officers.

“We know their intentions are very good, but what happened yesterday just complicated the work of the police officers,” Mathieu said.

Jocelyne Fortier lives in the neighbouring village of St-Agapit, where police have also looked.

“It's appalling, it's stressful,” she said. “We lock our doors, we don't know if it's dangerous or not.”

The car accident that triggered the investigation happened near her brother's residence. And the sisters remind her or her own nieces, about the same age.

“As soon as there are children involved, it's even more difficult,” Fortier said.

Carpentier was last seen wearing a grey T-shirt and jeans. He is listed as being five-foot-10 and weighing 130 pounds.

Anyone who sees Carpentier or has any information on his whereabouts to immediately contact 911.

- with files from Sidhartha Banerjee in Montreal