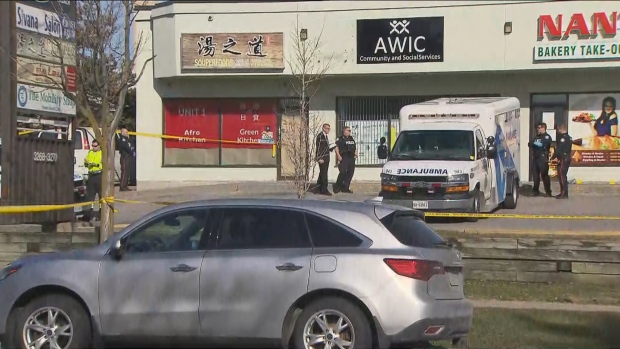 Toronto police are investigating a fatal assault in Scarborough on Sunday, April 5, 2020.

Police have identified the victim in a fatal assault at a plaza in Scarborough on Sunday afternoon as a 58-year-old Toronto man.

Insp. Paul Rinkoff previously told CP24 that two men became involved in a dispute inside a bakery near Finch and Warden avenues at around 3:20 p.m.

He said that the dispute eventually moved outside and one of the men assaulted the other, causing serious injuries.

The victim was subsequently pronounced dead on scene.

Police say that that a suspect in the homicide was last seen walking northbound on Bridletowne Circle following the incident.

He is described as brown, between 40 and 50 years of age with a medium build. He was last seen wearing a blue winter-style jacket with grey pants and black shoes.