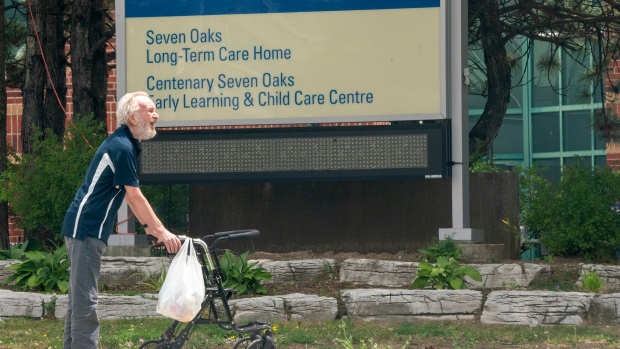 A man takes a walk outside the Seven Oaks Long-Term Care Home in Toronto on Thursday, June 25, 2020. THE CANADIAN PRESS/Frank Gunn

Positivity rates in city-run long-term care homes have dropped significantly following the completion of the vaccination of residents and workers earlier this month.

The weekly positivity rate in Toronto’s long-term care homes was nearly 11 per cent during the first week of November but had dropped to 0.6 per cent by the week of Feb. 7, according to new data provided by Toronto Public Health.

That is compared to a city-wide positivity rate that is still nearly five per cent.

“This is a good sign when it comes to the effectiveness of the vaccine,” Mayor John Tory said during a briefing at city hall on Monday. “It shows the difference the vaccines will make when we have enough supply from the federal government to accelerate further rollouts.”

All consenting residents and staff at Toronto’s 87 long-term care homes were administered the second dose of the COVID-19 vaccine by Feb. 16, marking a significant milestone in the vaccination campaign.

Toronto Medical Officer of Health Dr. Eileen de Villa said that since the completion of the city’s vaccinations efforts within the long-term care sector, there has been an encouraging decrease in cases in the sector.

In fact as of Monday only 15 Toronto-long-term care homes had active outbreaks compared to dozens earlier in the second wave.

De Villa, however, warned that the positivity rate in the overall community remains “too high to feel good about,” especially given the rising number of cases involving more infectious COVID variants.

“We are not out of the woods yet,” she said. “We have to remember despite our exhaustion, our frustration and our yearning that we can be our best friend or our worst enemy when it comes to the resolution of the COVID-19 pandemic.”

Steady increase in variants of concern

De Villa said that there continues to be a “steady increase” in cases involving the so-called variants of concerns with the total number of specimens that have screened positive rising from 341 as of Feb. 18 to 511 as of today.

There are also 71 lab-confirmed cases of the variants, 70 of which have been determined to be the B.1.1.7 variant that originated in the United Kingdom and is believed to be at least 50 per cent more infectious.

“Each day it has increased and I remind you about the nature of exponential growth which is what we are dealing with. Exponential growth is a steady, stealthy lower level of growth until a point where infection rates explode and the only real option to ride out that wave of disease and hope for the best,” de Villa warned.

Toronto will remain under a strict lockdown until at least March 8 after de Villa asked the province for another two weeks to monitor the impact of the new variants.

On Monday, Tory said that he is “optimistic about the ability of the people of Toronto to put in two more weeks of really solid compliance with the public health advice.”

He said “that if we do that there is reason to be optimistic that we can begin a transition to a different place.”

“I think people really want this to be over and they will cooperate and comply,” he said.