Premier: Parents will have to agree to disagree with sex-ed curriculum 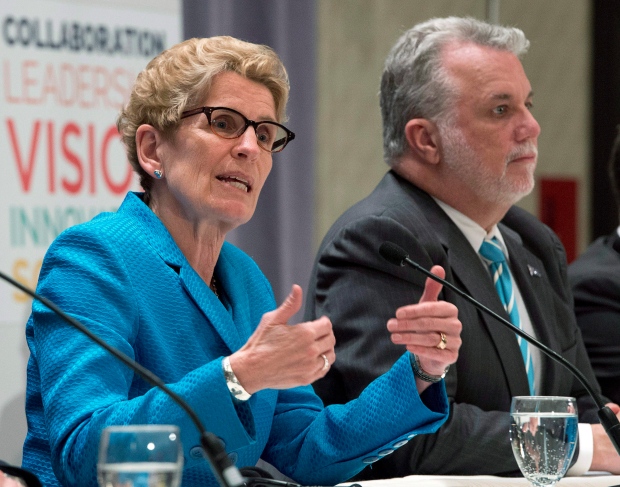 TORONTO -- The premier of Ontario says parents opposed to the province's updated sex-ed curriculum will "have to agree to disagree" with her government on the new document, which some critics argue is not age appropriate.

A group of parents met privately Wednesday with Premier Kathleen Wynne to demand she withdraw the new policy, which was last updated in 1998.

The curriculum will take effect in September as planned, Wynne said following the 45-minute meeting.

"I think in some cases we're just going to have to agree to disagree," she said.

"But there are some clarifications in terms of how parents can withdraw their kids from class, what kind of information parents will get before the curriculum is taught to their kids. I think there's some work we can do there."

A Facebook group with nearly 6,000 "likes" is encouraging parents who oppose the new curriculum to keep their kids home next Monday in protest. The head of the Peel District School Board said she believes the planned protest will affect classes in her region, west of Toronto, though perhaps not for the whole week.

"Certain communities within the Peel Region are extremely culturally diverse and we have heard from that diversity," said Janet McDougald.

"It's not simply our South Asian community that might be concerned, it spans a whole range of people. So if the activity around this at our board meetings and with trustee calls and emails, etc, if that's any indicator, then we do believe that at least for that one day...I imagine that we will see a fair number of withdrawals."

The protest may only affect elementary schools in Peel Region as high school teachers are heading toward a strike.

Earlier this month, thousands of people gathered on the lawns of the Ontario legislature to protest the new curriculum. Some complained that the curriculum was not age appropriate, while others insisted children should not be taught about same-sex relationships and different gender identities. Many of those criticisms were repeated in comments on the Facebook page.

"God has send so many Teachers to teach us about sex, namely Jesus, Muhammad, Krishna, Baba Guru Nanak and so many others," wrote one parent.

"They have taught us that once you are adult, find a person of opposite sex and live with him/her, have sex and have children."

Under the curriculum changes, Grade 3 students will learn about same-sex relationships, kids in Grades 4 and up will learn more about the dangers of online bullying, while the dangers of sexting will come in Grade 7.

Other Facebook users wrote that it should be up to parents, not the government, to determine what their kids learn about sex. More still wrote that the curriculum is full of "deviant sexual practices," amounts to "child abuse" and is a result of the premier's "predilection."

Wynne, who is openly gay, has said she believes some of the opposition is motivated by homophobia. The province's education minister has accused Conservative groups of fuelling the uproar. Liz Sandals said if parents keep children home for a week in protest, the kids are the ones who will lose.

"I've been involved in education for a very long time and there are always a certain number of parents who don't want any sex-ed curriculum," she said. "There are some people that we will never convince."

McDougald said while the Peel board supports the curriculum, many parents in the region do not, and on behalf of them she has sent a letter to the ministry outlining their concerns about age-appropriateness and that it goes against their culture.