Post-secondary tuition will now be free for students from low-income families.

That was one of the “good news” headlines that came out of the 2016 provincial budget which for the most part outlined a more expensive life for middle-class Ontarians.

The budget, which was tabled in the legislature Thursday afternoon, announced a new plan that would make higher education significantly more affordable but also announced price increases on wine, cigarettes, medication for seniors and a cap and trade system that would raise the price of heating a home and filling up a vehicle with gas.

To help offset those costs, the Liberals said they will eliminate the $30 fee that drivers pay for drive clean emissions tests and committed to reducing the cost of the UP Express to $12 for non-presto users and $9 for those with the card. They also announced a free shingles vaccine for seniors between the ages of 65 and 70 and made more lower income seniors eligible from the provincial drug plan.

Their post-secondary education plan was the biggest goodie in the budget book. Students who are from families with an income of less than $50,000 will get non-repayable grants that will cover their tuition plus a good chunk of related education costs. Other parts of their education-related costs will be offset by small, subsidized loans.

When asked if he was giving with one hand and taking with the other, Finance Minister Charles Sousa said it was all about making the right investments.

“We are investing in one hand and ensuring you reap the rewards of what you sow,” he told reporters Thursday before the budget was tabled.

Opposition Leader Patrick Brown said the Liberals missed their chance to show Ontarians they were hearing their concerns about the high cost of living.

“This budget is about taking one step forward and two steps back,” he said. “Things are about to get more expensive.”

The province is projecting a drop in the deficit in the 2015-16 fiscal year.

The Liberals say the projected deficit is $5.7 billion – that’s $1.8 billion lower than what was forecast in the fall economic update -- making it the seventh year in the row they beat deficit targets. The government expects the budget will be balanced in 2017 – 10 years after Ontario last balanced its budget in 2007.

Sousa said the government will balance its budget by limiting program spending and cracking down on those who don’t pay their taxes.

But NDP Leader Andrea Horwath told reporters she is concerned it will come in the form of many cuts, pointing to $430 million taken from the education sector and previous eliminations from Ontario’s healthcare industry.

“I hoped the premier would take this opportunity to listen to people, to focus on their priorities, like protecting and creating good jobs, halting cuts to education and healthcare, and stopping the sell-off of Hydro One,” she said. “Unfortunately, it’s clear that this budget puts stretch goals ahead of the basics.” 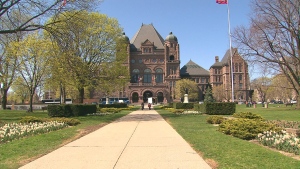 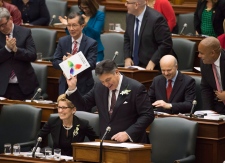 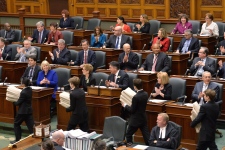 Pages deliver the Ontario 2016 budget to MPPs at Queen's Park in Toronto on Thursday, February 25, 2016. Ontario Finance Minister Charles Sousa is at centre right and Premier Kathleen Wynne is at centre left. THE CANADIAN PRESS/Nathan Denette