Pride Toronto grappling with allegations of harassment, misuse of funds 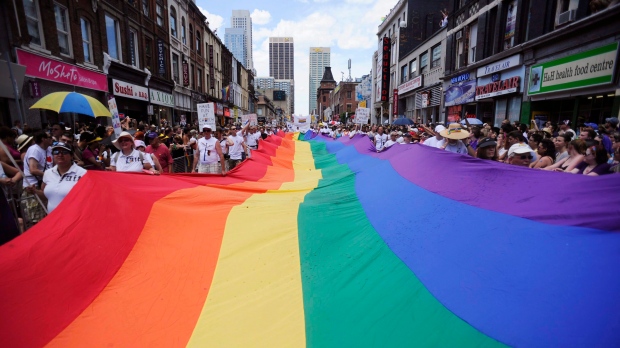 People take part in the annual Pride Parade in Toronto on Sunday, July 3, 2011. (THE CANADIAN PRESS)

Following the sudden departure of its executive director, Pride Toronto says it is dealing with allegations of verbal harassment and misuse of funds at the organization.

In a statement released through social media late Wednesday night, The Pride Toronto Board revealed that the allegations were brought forward by staff, volunteers and board members roughly six months ago in late June and early July.

The current board, which was formed in April, said it took the allegations “very seriously” and hired an independent third-party investigator to carry out an “exhaustive, intensive and thorough investigation.”

The allegations about misuse of funds pertain to expenditures prior to 2019 and involved “very small amounts” in relation to the organization’s overall budget, the board said.

“As a community organization, we strive to be transparent, accountable and operate under best practices in the service of our communities,” the organization said in its statement.

While the group disclosed the allegations and the investigation Wednesday night, they did not release its results. The board said new policies and procedures were put in place in May to ensure greater transparency and tracking around board expenditures. They did not say who the harassment allegations pertained to.

The statement comes a week after Olivia Nuamah left her role as Pride Toronto’s executive director. Pride Toronto revealed Tuesday that Nuamah was out of the role. The group thanked her for her service, but gave no explanation for her departure.

The board’s statement Tuesday made no mention of Nuamah.

The statement said that Pride Toronto is on track “both fiscally and organizationally” to deliver Pride Month activities in June.

The group is set to hold its annual general meeting on Jan. 29.

A spokesperson for Pride Toronto told CP24.com Thursday that nobody was available to comment on the board’s revelations.

A message from the Pride Toronto Board of Directors#PrideTO pic.twitter.com/Jvu8DWdxhc