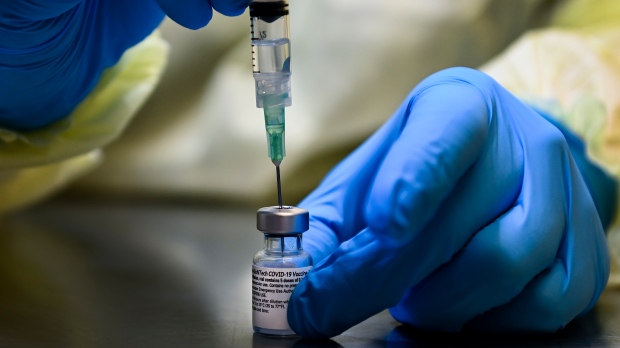 When it comes to vaccine hesitancy, misinformation and mistrust sparked by "medical racism" are among issues confronting scientists, doctors and community groups trying to provide assurance as immunization programs roll out across Canada.

Dina Guarin, 56, hasn't decided if she'll get vaccinated but said her sister, a nurse in Seattle, has already been immunized.

"Will it be safe? Will it really keep us from getting COVID?" Guarin said from Vancouver.

She said she knows someone who's worried about possible long-term consequences including infertility and that her 81-year-old mother and others in the Filipino community want information in Tagalog.

Tara Moriarty, an infectious diseases researcher at the University of Toronto's faculties of dentistry and medicine, started a project in January to host seven-nights-a-week Zoom sessions with residents and staff of long-term care and retirement homes, along with family members, in order to provide reliable information on vaccines.

"I had no idea when we started about just how much need there was," said Moriarty, whose past experience as a personal support worker in Montreal had her concerned about the slow deployment of vaccine and the potential for widespread deaths, especially among older adults.

The initiative is run by COVID-19 Resources Canada, which Moriarty co-founded last March, and has expanded so anyone hesitant about getting vaccinated could join to get their questions answered by a rotating group of about 30 volunteer health-care experts.

They include virologists, pharmacists, family doctors and scientists who offer jargon-free explanations.

Moriarty said some of the top questions asked include how vaccines could have been developed in under a year and whether they can be administered to people taking certain medications, pregnant women or those with a chronic illness.

"There are no talking heads," Moriarty said of the experts' conversational approach as they also address issues like bogus treatments being promoted online and the findings of the latest clinical trials.

The project has been so successful that she has also started daytime Zoom sessions for unions representing health-care workers.

Prital Patel, a public-health scientist with a PhD in medical biophysics from the University of Toronto, is a regular participant in the sessions and said they also provide experts like her a chance to understand the concerns of people as they "let their guard down" if they're hesitant about being immunized.

"As scientists, we're a bit oblivious to what people are hearing on the ground and the kinds of misinformation that's leading them to perhaps become a bit hesitant. So we can actually really try and speak to the truth and the science behind everything in a way that's understandable."

Those who may have experienced racism in the health-care system and are disproportionately affected by the pandemic are a key focus for her, Patel said from Sydney, Australia, where she is working on a project to understand the risk factors associated with health-care workers becoming infected with COVID-19.

"As a person of colour, I'm there to represent any people who are from the South Asian background who may not speak English," said Patel, who speaks Gujarati and Hindi as well as some Kiswahili, which she learned in Kenya.

British Columbia and Ontario have prioritized immunization for Indigenous communities, and federal Indigenous Services Minister Marc Miller has said the government is working with other provincial and territorial health authorities to prepare mass vaccination programs for First Nations, Metis and Inuit communities.

In northern Ontario, for example, residents of 31 remote communities, mostly of the Nishnawbe Aski Nation, are currently being inoculated as teams of health-care workers are deployed there for a weeklong stint.

Dr. Lisa Richardson, an internal medicine specialist and a strategic lead in Indigenous health at the University of Toronto's faculty of medicine, said she will be part of a team going north this week.

"When I talk about vaccine hesitancy, I actually invert it and I say, 'problems with the health-care system that have led to vaccine hesitancy.' So, when you start to explain that historical context, people can then situate the mistrust in that," she said.

"As an Indigenous practitioner, I hear about stories of mistreatment in the health-care system, even just locally, every week. So, it's an ongoing problem," said Richardson, noting the example of Quebec resident Joyce Echaquan, who posted a video of herself being verbally abused as she lay dying in hospital last October.

Richardson said people who get adequate information about COVID-19 vaccines feel empowered to make their own choice, and the vast majority of people in Indigenous communities are getting immunized.

"You're going to mull it over and make the decision yourself. That's really key so that it's not forced because there's been so much forced activity in health care, things that are done without consent."

This report by The Canadian Press was first published Feb. 28, 2021.