Hundreds of protesters took to the streets Monday to condemn the actions of Toronto police in a weekend shooting that left an 18-year-old man dead.

The protesters gathered at Yonge-Dundas Square at around 5 p.m., making their way towards Dundas Street and Bellwoods Avenue, where Sammy Yatim was fatally shot while brandishing a knife aboard a streetcar early Saturday morning.

“We are here today to express our outrage at the police killing of an 18-year-old boy that was taken down brutally by Toronto police,” one protester told CP24 as the march got underway. “We are here to demand justice for him and his family.”

The protesters briefly stopped outside 52 Division headquarters near McCaul Street, where they could be heard chanting "Justice for Sammy," before resuming their march. Hundreds of them continued to march to 14 Division where they stood and continued to yell "shame, shame, shame."

Many remained at the site of the incident for a vigil, lighting candles and leaving signs expresssing their sympathy and remorse for the situation.

The young man's mother and sister were present at the vigil though they refused to identify themselves to the media. They did not take part in the protest outside the police station.

Earlier on Monday, Toronto Police Services Association President Mike McCormack confirmed to CP24 that the officer involved in the shooting has been suspended with pay as the SIU completes its investigation.

Though it has happened before, the suspension of an officer is a rare occurrence, especially when they are not facing any charges.

The news came in the wake of Toronto's top cop promising a thorough investigation into the conduct of his officers who were involved in the shooting.

Chief Bill Blair made the vow Monday during a news conference as the police service faces mounting criticism and questions about whether the use of lethal force was necessary.

Blair promised to address "serious concerns" that have been raised after video of the incident emerged over the weekend.

“I know that people are seeking answers to what occurred, why it happened and if anything could have been done to prevent the tragic death of this young man," Blair said as he read from a prepared statement. "I am also seeking answers to those important questions.”

“Addressing the concerns of the public and the deceased young man’s family is our highest priority," he later added.

Blair's internal review is separate from an ongoing probe by the Special Investigations Unit, an arm's length agency that will determine whether criminal charges are warranted against any of the officers.

Toronto police will co-operate with that investigation, said Blair, who took the rare step of speaking publicly amid an ongoing SIU investigation.

During his remarks, Blair offered his condolences to Yatim’s family and friends, and said he has asked deputy chief Mike Federico to reach out to the man’s family to offer condolences and support.

“As a father I can only imagine their terrible grief and their need for answers,” Blair said. “We will commit to doing our best to ensure that those answers are provided.”

After reading the written statement, Blair left without taking questions from reporters. The police chief said the law prevents him from disclosing information about the incident or investigation because the SIU has invoked its mandate.

The male officer involved in the shooting has six years of service with Toronto police, a source told CP24 crime specialist Sue Sgambati.

Blair did not say if any of the officers have been or will be placed on leave.

Yatim, 18, was pronounced dead in hospital after the altercation occurred at Dundas Street West and Bellwoods Avenue early Saturday morning.

Yatim suffered multiple gunshot wounds, and a Taser was also deployed during the altercation, the SIU said in a news release Monday.

Witnesses said the deadly confrontation occurred shortly after Yatim brandished a knife and ordered people off the streetcar.

After the gunshots, the officers – some still with their guns drawn – are heard shouting additional commands, including “drop the knife,” as they approach the door.

Seconds later, the sound of a Taser is heard as a male officer yells “drop the knife.”

The video, about two minutes and 20 seconds in length, was recorded by a witness as he stood nearby.

Speaking with CP24 Monday afternoon, McCormack asked the public to refrain from rendering judgement strictly on the basis of the video.

“I acknowledge the video and I have seen it but it only presents one narrow slice of what happened that night,” he said. “Let’s wait and let’s get the evidence and we will go from there.”

The SIU is handling the investigation because the incident involved police.

“This is tragic in more than one way. It is tragic for the family, but it is also tragic for our officers. I know that this officer in particular is very distraught over what happened,” McCormack said. “This is not what a police officer looks forward to doing, this is not a great resolution, but unfortunately we get paid to make difficult decisions and do difficult things and this is part of police work.”

Premier Kathleen Wynne declined to comment on the specifics of the case, but said her heart goes out to the teen’s family.

“It’s a tragic situation,” Wynne told reporters after she toured an employment services centre in Scarborough.

Wynne said she hasn’t seen the amateur video that has been included in media reports and widely circulated on the Internet.

In a series of tweets, Ontario ombudsman Andre Marin said his office is “following very closely” to make sure Toronto police co-operate with the SIU investigation.

Marin said his office is meeting tomorrow to discuss its priorities for the next year, and they will discuss the shooting and ask whether Ontario’s guidelines/directions to police on how to de-escalate conflict are sufficient. 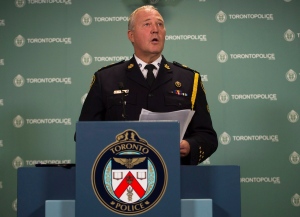 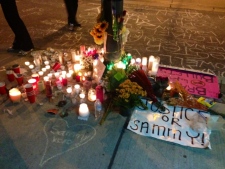 On July 29, 2013, messages, candles and flowers are left at the site of a deadly shooting that killed 18-year-old Sammy Matin. (Cristina Tenaglia/CP24) 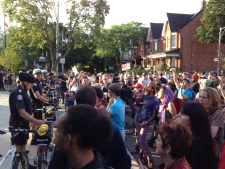 A crowd of protesters gathered outside 14 Division on July 29 to demand answers from police about a shooting that killed Sammy Yatin. (Brian Carr/CP24) 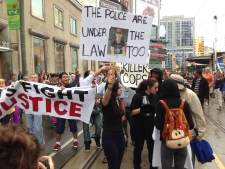 FILE - Protesters march along Dundas Street in a demonstration being held to condemn the actions of police in the shooting death of Sammy Yatim. (Brian Carr/CP24.com) 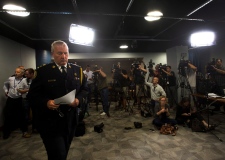 Police Chief Bill Blair arrives at a news conference in Toronto on Monday, July 29, 2013, to comment on the fatal shooting of 18-year-old Sammy Yatim. (The Canadian Press/Nathan Denette)

Sammy Yatim is pictured in an undated photo.