Protests are important but risks of COVID-19 must be considered: Freeland 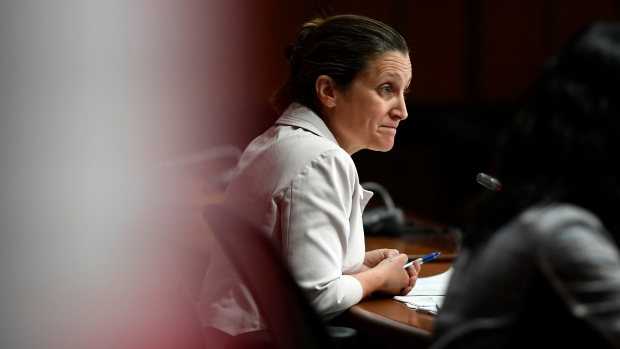 Deputy Prime Minister Chrystia Freeland speaks during a news conference on the COVID-19 pandemic at West Block on Parliament Hill in Ottawa, on Wednesday, June 3, 2020. THE CANADIAN PRESS/Justin Tang

OTTAWA - Deputy prime minister Chrystia Freeland suggested Wednesday that COVID-19 will keep her away from anti-racism marches planned across Canada in coming days.

Freeland called peaceful protests a valuable and important form of political expression, but with large gatherings still restricted in Canada to slow the spread of the novel coronavirus, they must be approached with caution.

“The coronavirus issue is a really serious one to think about in that context,” she said.

“As a mother, I have been struggling very hard to say to my children that they can't see their friends, and they can't be in groups, so setting an example on that front is also an important one for me.”

Freeland's comments came amid calls from opposition politicians and community groups for the Liberal government to move from words to actions in its efforts to address racism in Canada in response to protests over the issue escalate in the U.S.

Tensions have run high in several U.S. cities for days after George Floyd, a black man, died in police custody on May 25. A police officer knelt on his neck for several minutes, even as Floyd said he couldn't breathe.

The marches in the U.S. have been both peaceful and destructive, sometimes spurred on by aggressive policing, and have resulted in other deaths as well as widespread property damage.

U.S. President Donald Trump has lashed out at the protesters, calling them thugs and anarchists. He has suggested the military be used to quash them and has appeared to advocate violence against protesters. This week, tear gas was used on protesters who were blocking Trump's path to a photo-op outside the White House.

The prime minister fell silent for several moments Tuesday when a reporter asked for his views on the crisis. He eventually said Canadians were watching in horror what was going on in the U.S., but did not mention Trump directly.

He then pivoted to acknowledging more must be done in Canada to address racism.

“The prime minister of Canada has to call out the hatred and racism happening just south of the border and if the prime minister can't do that how can everyday people be expected to stand up?” Singh said.

“The prime minister should lead by example.”

For her part, Freeland said Trudeau's response was excellent and eloquent.

Trudeau has long ducked questions calling on him to respond to statements by the U.S. president, repeating - as he did Tuesday - that Canadians expect their government to focus on them.

But Singh said that's not acceptable.

“And this is one of those times you have to stand up for what's right.”

Singh called on Trudeau to put actions behind his focus on Canadians. The Liberals could find a path through legislation to end racially motivated policing tactics and address the overrepresentation of visible minorities and Indigenous Peoples in prisons, he said.

They could also move faster to sew up holes in the country's social safety nets that create the inequalities that lead to racism.

“Those are just some of the things the government can do immediately that would go beyond the pretty words of a prime minister who says that he cares,” Singh said.

In a separate appearance, the Green party's Elizabeth May said while it is true that Trudeau's “pretty words” were not the same as action, they are the epitome of what is making Canada different from the United States at this time.

“Pretty words are so much better than vile language so bad that Twitter decides to put a warning that it incites violence, that Facebook employees quit because Mark (Zuckerberg) won't take down comments that are incendiary and those comments are from the president of the United States,” she said.

May said Trump has made everything going on in his country worse and that Canada must stop pretending the United States offers a safe place of refuge for minorities.

She repeated the Greens' long-held stance that Canada must suspend the Safe Third Country Agreement between Canada and the United States. The deal sees both countries reject most asylum claims lodged at the land border on the grounds that both countries are safe, and so asylum seekers must seek refuge where they first arrive.

“It is clear that if you're Muslim, if you're black, if you're Latina, if you're Indigenous, the United States is not a safe country,” May said.