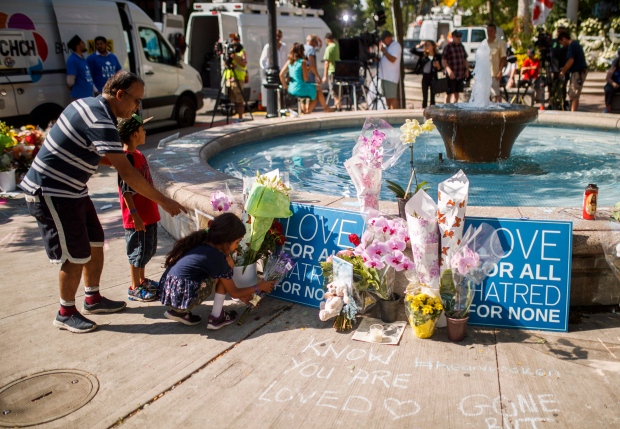 People leave flowers at a memorial honouring the victims of a shooting on Sunday evening on Danforth, Avenue in Toronto on Tuesday, July 24, 2018. THE CANADIAN PRESS/Mark Blinch

TORONTO -- The body representing Canada's psychiatrists is cautioning the public not to draw connections between mental illness and the risk of violence in the wake of a deadly shooting spree in Toronto.

The Canadian Psychiatric Association says it's concerned that Sunday night's violence in Toronto's Greektown may deepen stigma against people contending with mental illness after the gunman's parents said their son struggled with psychosis and depression for most of his life.

Faisal Hussain killed two people and injured 13 others as he fired bullets down Danforth Avenue. He was eventually found dead in the area. His family has said his mental-health conditions did not respond to treatment.

The psychiatric association says it condemns Hussain's actions, but believes discussing them in the context of his depression risks stigmatizing people with psychiatric disorders.

It says mental illness does not equate to a higher risk of violent behaviour, adding that people living with such conditions are more likely to experience violence than perpetrate it.

The association says the best predictor for violent conduct is previous incidents of violence, regardless of whether or not someone has a mental illness.