Members of the community have come forward to help a Toronto pet owner pay for medical treatment after he said his dog was attacked in Scarborough on Sunday.

Keith Lewis told CP24 that he was out walking his dog Eugene in the area of Midland Avenue and Kingston Road on Sunday night when a German Shepherd came along and attacked the six-year-old canine.

“I was trying to fight the dog off but he would not let go,” Lewis said Monday.

Eugene, who is a 16-pound Miniature Pinscher- Terrier mix, was covered in puncture wounds following the incident.

Lewis said the German Shepherd's owner offered to pay for Eugene’s treatment but once the pair got to a vet, he said the other owner took off without paying a cent.

Lewis said he was told by veterinarians that Eugene’s treatment would cost thousands of dollars.

After members of the public got wind of the attack on Eugene, Lewis said people have come forward to offer financial assistance.

Dr. Clayton Greenway, a vet at the West Hill Animal Clinic in Scarborough, also reached out to Lewis and said the clinic could help cover the costs associated with Eugene’s recovery.

"For what Eugene needs, were going to be able to cover that, clean up his wounds,” Greenway said, adding that he would make sure Eugene doesn't have any internal injuries.

Lewis said he is grateful for the outpouring of support.

“I appreciate it. I don’t know any of these people,” he said.

“I’m just grateful that he is going to get some good treatment now.” 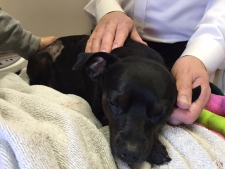 Eugene, a mini-pincher- terrier mix, is seen in this photo. (Arda Zakarian/ CP24)