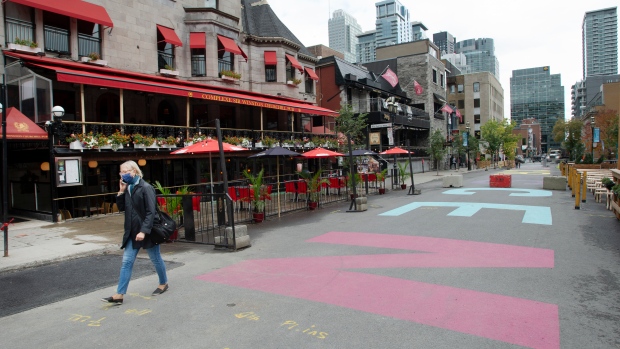 A woman walks past the bars on Crescent street Wednesday, September 30, 2020 in Montreal. The Quebec government has closed all bars and in-room dining as of midnight for the next twenty-eight days.THE CANADIAN PRESS/Ryan Remiorz

Quebec reported 16 more deaths Thursday as it began the first day of new restrictions meant to flatten a spike in COVID-19 infections, while Ontario tweaked its school screening guidelines and a hospital outbreak in Calgary grew.

Partial lockdowns in the Montreal and Quebec City areas, along with a region south of the provincial capital, are to last at least 28 days.

Bars, casinos, concert halls, cinemas, museums and libraries have shuttered and restaurants are limited to takeout.

The province announced Thursday that restaurants and bars forced to close can get loans to cover certain fixed costs not covered by federal programs. Up to 80 per cent of the loan amount, to a maximum of $15,000, will be forgivable.

“It's damn good news for us,” said Paul Holder, who co-owns several restaurants in Montreal.

But Holder said it won't cover the full amount of rent and taxes. He and other business owners say they're still confused about why, after building barriers to separate customers and ensuring staff are wearing personal protective equipment, they've been forced to close.

Private gatherings are prohibited in the affected regions and people cannot have any visitors from another address at their homes, with few exceptions.

Outdoor gatherings are forbidden, masks are mandatory for demonstrations and police have the power to hand out hefty fines to those who flout the rules.

The new deaths brought Quebec's total to 5,850. It had 933 new cases and the number of people in hospital rose by 13 to 275. Forty-six people were in intensive care.

Ontario tweaked its screening guidelines for schools and daycares so that students with the sniffles or a headache can return after 24 hours if they feel fine.

Previously, they had to stay home until they received a negative test result or another medical diagnosis, often causing parents to line up for hours for tests.

“There's all sorts of other causes of a runny nose. There's other viruses circulating in the community,” said Dr. Barbara Yaffe, Ontario's associate chief medical officer of health.

“The kid might have just been outside and got a runny nose.”

In Ontario, there were 538 new COVID-19 cases and three new deaths. There were 162 people in hospital, including 36 in intensive care.

Nearly 40,000 tests were completed since Ontario's last daily report, but there were still more than 82,000 samples waiting to be processed.

In Alberta, a technical glitch prevented 5,000 people who tested negative for the novel coronavirus from getting their results by phone autodialer or text. Those affected made up less than three per cent of the 224,000 tests completed between Sept. 3 and 29.

Anyone with a positive result in that time frame was informed by direct phone call.

Alberta Health Services said Thursday the problem had been corrected and delayed results were being delivered.

Also in Alberta, nearly 300 staff at the Foothills Medical Centre in Calgary were isolating as the number of COVID-19 infections at the busy hospital continued to grow.

As of Thursday, 35 patients, 29 workers and three visitors had contracted the virus. Five patients had died.

Staff restrictions and a reduced number of in-patient beds has meant 45 of 260 planned surgeries at the hospital have been postponed.

Alberta reported 173 new cases in Thursday's update and two additional deaths. Sixty-four people were in hospital, including 12 in intensive care.

Provincial chief medical officer Dr. Deena Hinshaw said COVID-19 won't scuttle Halloween this year. She said it should be safe as long as trick-or-treaters stick to their cohorts and there aren't indoor parties.

“I have no plans to suggest that Alberta cancel Halloween this year,” she said. “My own children would never forgive me.”

Quebec is to follow in the next few days. British Columbia, Alberta, Nova Scotia and Prince Edward Island are in the final stages of discussions with Ottawa.

This report by The Canadian Press was first published Oct. 1, 2020.