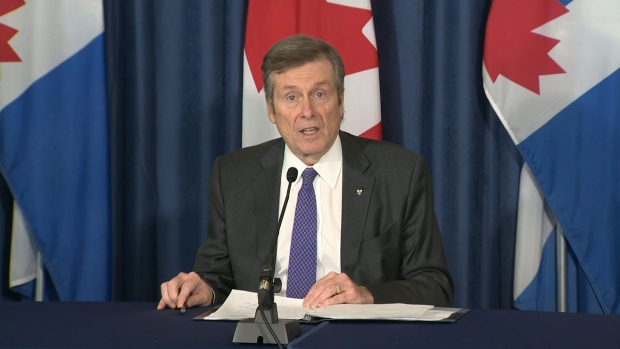 Mayor John Tory is warning that the city will soon have to “begin the process” of implementing a myriad of devastating service cuts, unless the federal and provincial governments come to an agreement on a major bailout package for municipalities.

Tory made the comment following a virtual meeting with mayors and regional chairs from across the province on Monday morning.

He said that while he is still holding out hope that the other levels of government will cover an estimated $2 billion shortfall in Toronto’s budget due to the COVID-19 pandemic, time is quickly running out for them to do so.

He said that city staff are preparing a report for the next meeting of city council that will outline the service cuts that will be necessary in the “absence of any help coming from the other levels of government” with that report “probably beginning the process of making some of those service reductions.”

“We need action and we need it fast. We are now more than half way through our financial year and we don’t have any more time to waste,” he said of the need for funding. “Anyone who has run a business or for that matter a household budget knows that when you lose income the longer you leave making decisions on how to make up for it the worse it gets and the more severe those cuts and consequences are going to have to be.”

The city has been losing about $65 million a week during the pandemic as a result of reduced revenue and increased costs.

Tory said that while near-daily conversations with Ottawa and Queen’s Park about helping the city cover the shortfall have been “cordial and productive,” they haven’t gone anywhere.

That has left city officials in the difficult position of having to weigh “unacceptable tax increases or serious service cuts,” he said.

“The time has come for them to reach an agreement because we are at the stage now where we need that help and we need it now. I am respectfully suggesting that they should set a deadline on themselves of this week to get this resolved,” he said.

Thousands of city employees could be laid off

Municipalities are legally prohibited from running deficits so Toronto and other cities facing significant shortfalls as a result of the pandemic will have to find a way to cover it by the end of the fiscal year.

Tory has previously said that without government help the city would have to implement a 47 per cent tax increase or push through a series of cuts that would shutter entire subway lines and close libraries, among other things.

An estimated 19,000 city employees would also lose their jobs as a result of the service cuts.

“We are looking right now for any kind of savings and any kind of efficiencies that we can find and we are finding some but when it comes to a revenue shortfall and cost increase of $2 billion it is pretty hard to find those sort of savings without cutting services,” Tory warned on Monday. “There just isn’t any other option; I wish there was. If there was another option we would be pursuing it.”

Last week, Premier Doug Ford announced $150 million in funding to municipalities to help them boost shelter capacity during the pandemic but he has so far not committed to the sort of wider bailout proposed by Tory and has said that the responsibility should rest with the federal government to keep cities afloat.

The federal government, for its part, agreed last month to provide municipalities with $2.2 billion in infrastructure funding ahead of schedule in order to help them deal with the fallout from the pandemic but it has not offered any additional help at this time.

“The Prime Minister and the Premier have constantly said that they have heard us and that they are in our corner but we are still waiting and our message today is that time is running out. Frankly, time is up,” Guelph Mayor Cam Guthrie said during Monday’s news conference. “Halfway through the budget year municipalities now have no choice but to make difficult decisions which could include raising property taxes and cutting services. Those cuts will hurt the very same people that the federal and provincial governments have spent billions trying to help during this pandemic.”