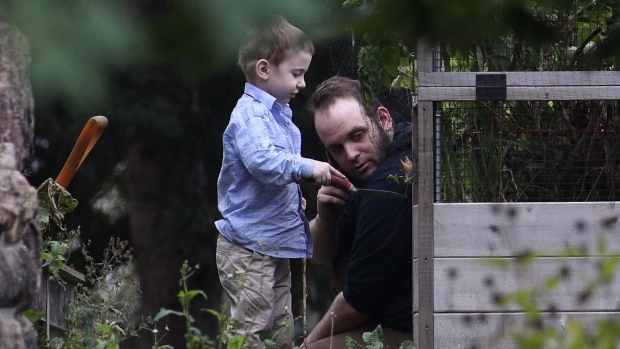 Joshua Boyle and his son Jonah play in the garden at his parents house in Smiths Falls, Ont., on Saturday, Oct. 14, 2017. THE CANADIAN PRESS/Lars Hagberg

Rescued hostage Joshua Boyle says his children are still adjusting to life outside of captivity but are “improving” all the time.

Boyle and his family were rescued in Pakistan on Wednesday following a five-year ordeal that began when they were kidnapped while on a backpacking trip in Afghanistan.

At the time of the kidnapping, Boyle’s American wife Caitlan Colema was pregnant with the couple’s first child. The couple then had four children in captivity but Boyle has said that one of them was murdered while they were in captivity.

CP24 spoke with Boyle via email on Wednesday as his family adjusted to life back in Smiths Falls, where his parents live.

Here is what he had to say:

Q: How are your children doing?

A: The children are improving, we mentioned before that the eldest Najaeshi Jonah was doing well but that his younger brother Dhakwoen Noah was still struggling as much as ever with even just being able to look at his grandparents faces without terror...but honestly, just this morning he's made a literally overnight improvement in that he has decided he loves his grandmother after all (a hearty breakfast of pancakes was the clincher, it seems) — so obviously he's still incredibly troubled and stressed over everything, but it's a major step...she's the first person he's accepted since 2015. (Needless to say, thousands of times seeing the guards on a daily basis did not endear him to even one of them)

Q: What are their favourite toys or things they have experienced so far?

A: For Najaeshi, it's completely random — he's just explored the idea of a closet and declared he wants to sleep in it tonight and make a giant 'mouse nest' out of the clothes nut by tonight, he'll doubtless have a new favourite wonder. His quality of life has not just improved, it's gone up a thousandfold.

For Dhakwoen, it's the spinning top – he can't get it to spin himself yet but he seems to wish it could spin forever. Needless to say, family members fingers are getting sore but we love him enough to keep spinning it!

For Ma'idah, it's the discovery that there are other women in the world; she still can't be within a metre of any man except her father but if she sees a woman she starts squirming and trying to get over to her, regardless of who it is — to nestle in the love.

Q: What are the next steps for your family?

A: We're honestly not sure; my family's personal home is in Perth-Andover NB, though there's talk of returning to Breslau, and right now we're just intending to stay with my parents in Smiths Falls.