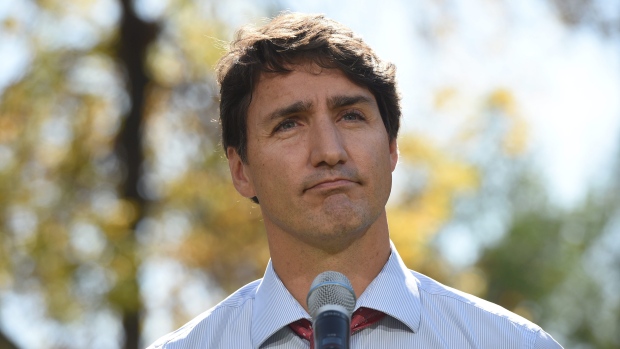 MONTREAL -- Residents of Justin Trudeau's home riding rallied behind the Liberal leader on Thursday as he struggled to deal with the fallout from old photos showing him in skin-darkening makeup, known as blackface.

Trudeau's campaign has been rocked by the emergence of the photos, which show him wearing blackface and brownface on at least three occasions, ranging from a high school talent show to an Arabian Nights-themed party in 2001 when he was 29.

But in Montreal's multi-ethnic Papineau riding, residents questioned about the scandal offered a collective shrug.

In working-class Parc Extension, where a majority of residents are immigrants who have neither English nor French as their mother tongue, residents conversed in Urdu, Arabic and Hindu as they watched their children play in a small park or ducked in and out of a number of small stores boasting goods from all over the world.

When questioned, many said they didn't believe Trudeau had meant to offend.

Sani Piameng, the owner of an African butcher shop and grocery store, said Trudeau has often visited his store and even watched soccer games with him and his customers.

"The man is not racist," said Piameng, who is black. "He's open to everybody."

His wife, Juliana Owusu, said she didn't feel "at all" offended by Trudeau's actions, which she compared to dressing up for Halloween or a play.

"If I'm a black person, and I want to dress like Cinderella, is that racist?" she asked.

Piameng and Owusu said there are six people in their household, and all of them would vote for Trudeau.

Trudeau has apologized for the images, acknowledging that his actions were hurtful and damaging to many Canadians, especially those who have faced discrimination in their lives. He told reporters in Winnipeg that darkening one's face is "always unacceptable" due to the racist history of blackface.

On Thursday, Trudeau credited his time representing Papineau as a turning point in his understanding of race.

"As I've learned to not just represent people, but to fight for them and try to build a better community and society, I've learned every day that it is unacceptable to engage in this kind of behaviour," he said.

But in the riding itself, none of the residents who agreed to an interview had anything bad to say about the photos or the leader.

"It was no big deal, it was a long time ago," said Zahid Nassar, a convenience store worker. "When we're young, we all do stupid things."

Nassar, an immigrant from Pakistan, said he voted for Trudeau in 2015 and will likely do the same this time. If he doesn't, it will be because he's worried about safety in his neighbourhood, not old photos.

Others in the riding spoke favourably about Trudeau's decision to raise the Canada Child Benefit and his active presence at local community and cultural events.

On Jarry St., a man setting out a display at a fruit and vegetable stand described himself as a big fan of the Liberal leader.

The man, who can't vote because he's not yet a citizen, said he doesn't think the photos reflect Trudeau's true personality.

"I don't think he's really like that," said the man, who gave his first name as Arafat. "If I could vote, it would be for him."