Toronto’s Medical Officer of Health has issued new guidelines to residents amid a growing COVID-19 outbreak.

Dr. Eileen de Villa says that anyone returning from travel abroad, including to the U.S., should “avoid group interactions and public gatherings wherever possible” and refrain from interacting with elderly people and those with chronic health conditions for 14 days following their return.

She said that people who have travelled within Italy, Iran and China’s Hubei province, where the virus is most prevalent, should also be self-isolating for 14 days regardless of whether they are exhibiting symptoms.

“We all have a role to play in managing this situation and in delaying community spread for as long as possible,” she told reporters at a news conference at city hall on Thursday.

There have been 59 confirmed cases of COVID-19 in Ontario so far, including 29 in Toronto.

De Villa said that while there is no “confirmed evidence of local transmission” of the virus at this point, officials do expect that to “eventually occur.”

In the meantime, she said that residents need to change some of their behaviour, such as avoiding hand-to-hand contact through the shaking of hands.

She said that people should also be considering whether they have the necessary supplies on hand in the event that they or a loved one were to become ill and need to self-isolate at home.

“I think it is important for people to reflect on what their household needs are and how they can prepare for them in advance in case they themselves become ill or someone in their household does,” she said.

The new advice from de Villa comes on the same day as the city announced the formation of a task force and the activation of its emergency operation centre amid the COVID-19 pandemic.

On Thursday morning the centre was operating with a level one response; however that has since been upgraded to a level two response, which will allow the centre to remain staffed 24 hours a day, 7 days a week. There are only three levels of response.

“As we have seen with COVID-19 the circumstances are changing not just daily but hourly. To that end the city must be flexible in how it responds,” Fire Chief Matthew Pegg, who is heading up the city’s response, told reporters at city hall. “Maintaining public safety, continuing to deliver essential public services and ensuring that our staff are appropriately protected are the priorities. City services that can be maintained will be, services that may need to be adjusted or suspended at some point will be determined as the situation and risk factors evolve.” 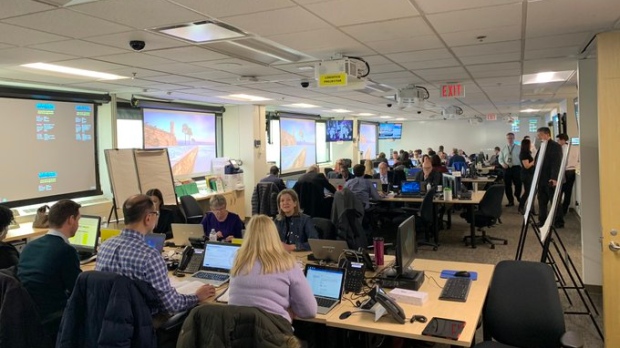 Pegg said that upwards of 50 people “from each and every city division and city agency” are now working on the response to the COVID-19 outbreak on a full time basis.

He said that some of the work being undertaken includes contingency planning for how the city would be able to continue to deliver essential services “in the event that 10, 25 or even 50 per cent of the workforce” was unable to work due to illness.

Pegg said that the plans are also being developed “in the event that critical supplies, like protective masks, aren’t able to be delivered due to supply chain issues.”

As well, he said that staff are evaluating each and every one of the public meetings and events planned by the City of Toronto and will make a determination on whether they should continue amid concerns over public gatherings.

“In all cases, the city’s response to the impacts of COVID-19 must be scalable. We must be able to ramp up or ramp down as circumstances change,” Pegg said.

On Thursday morning, the province confirmed 17 new cases of COVID-19 in Ontario, which was the biggest single-day leap in cases since it started posting the data.