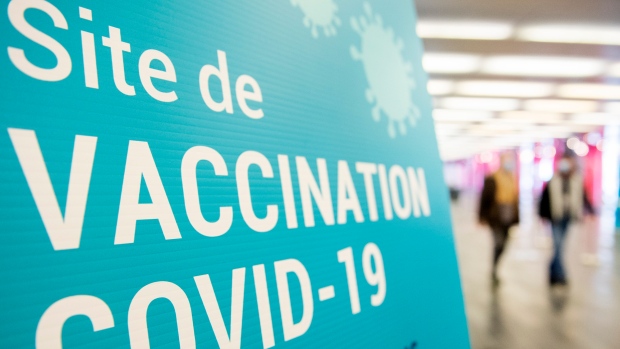 People walk by a sign for a COVID-19 vaccination site in Montreal, Sunday, April 4, 2021. THE CANADIAN PRESS/Graham Hughes

Authorities in Ontario and Quebec expressed concern on Monday that the recent rise in COVID-19 cases was putting renewed strain on the health-care system, as both provinces sought to contain the spread of the virus.

Ontario on Monday reported nearly 6,000 new COVID-19 cases over a two-day span, and Toronto Mayor John Tory announced he is working on a plan to vaccinate high-risk workplaces. Tory said the province needs to go further by working with the federal government to expand paid sick leave programs to help workers stay home and self-isolate.

The Ontario government has said it will not duplicate the paid sick leave program run by Ottawa, but Tory said rising case counts and the resulting pressure on the province's hospitals show that approach needs to be reconsidered.

“If paid sick days' time hadn't come before this ... then the time has certainly come now when we're in the third wave, and it is taking an even worse toll, it would seem, in terms of ICU occupancy, and hospital overload,” Tory said.

The number of patients in intensive care with COVID-19 has reached all-time highs in Ontario in recent days, with 494 people in ICUs on Monday, according to government data.

Quebec Health Minister Christian Dube also pointed to the situation in hospitals Monday as the province added five municipalities south of Quebec City to a list of cities that will have to abide by strict lockdown rules.

“The situation in our hospitals is concerning, hospital capacity in intensive care is fragile,” Dube wrote on Twitter. Quebec currently has 123 people in intensive care for COVID-19, which is still well below the stated capacity of 383.

The province announced Sunday that non-essential businesses and many cultural venues must close, schools will move to virtual learning and the overnight curfew will be advanced to 8 p.m. from 9:30 p.m. starting Monday evening in five parts of the Chaudiere-Appalaches region.

Dube said officials are also worried about the Montreal area, which he described as “under pressure,” although the province has not yet announced new measures for the metropolis.

“The rise in severe and critical illnesses is placing renewed strain on the health system and health-care workforce,” Dr. Theresa Tam said in a statement.

She said that while deaths have continued to level off despite the rise in cases, there is concern this trend could shift, especially since the more contagious variants have been linked to more severe illnesses and deaths.

This report by The Canadian Press was first published April 5, 2021

- With files from Shawn Jeffords in Toronto