'Risk is too high': Quebec delays vaccine mandate for health workers by one month 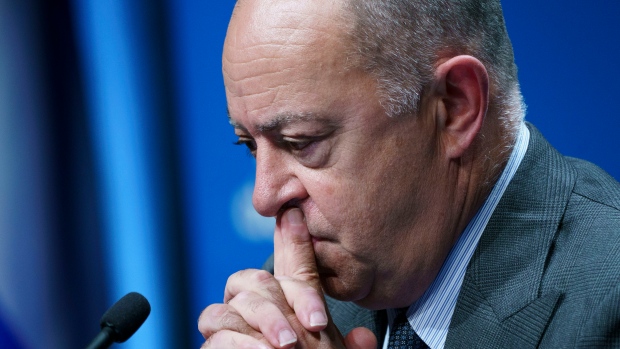 MONTREAL - One day after Quebec Health Minister Christian Dube said he was standing firm on his government's vaccine mandate deadline for health-care workers, he delayed it by one month.

Health-care workers will now have until Nov. 15 to get fully vaccinated against COVID-19 or risk being suspended without pay, Dube said Wednesday.

More than 22,000 employees in the province's public health-care system are not fully vaccinated against COVID-19, Dube said. And while the government was considering allowing workers with one dose to continue on the job, that would still force about 14,000 people out of the network, he added.

Suspending that many employees from an already fragile system would have been “irresponsible,” Dube told reporters in Montreal, adding that following through on the threat would have put unsustainable pressure on the workers who remained.

Dube said he was particularly worried about having to increase the use of mandatory overtime - a controversial practice his government has promised it would reduce as a way to attract and retain more full-time nurses, who are desperately needed in the network.

The Health Department said Wednesday it didn't know how many workers at private facilities, such as seniors residences, remained unvaccinated.

Dr. Lucie Opatrny, an associate deputy health minister, said the loss of 14,000 workers would have forced the closure of 600 hospital beds and 35 operating rooms across the province.

While those unvaccinated workers only represent four per cent of health-care workers in Quebec, she said the system is “already very fragile.” In some cases, such as in operating rooms, the suspension of one worker could make it impossible for the rest of their team to do their jobs, she added.

Unvaccinated health-care workers in the public system will be tested for COVID-19 three times a week, Dube said. And if they aren't vaccinated by Nov. 15, they will also lose their “COVID-19 premiums,” which increase workers' pay by up to eight per cent.

Marc Fortin, president of a group representing private seniors homes in the province, said the extension gives his members “room to breathe.”

A month ago, he said, about 8,000 of the approximately 40,000 employees in the network were not vaccinated - many of them cooks or maintenance staff who could switch jobs and work in restaurants instead.

While he said he supported the government's goal of having all health workers vaccinated, he said operators were worried about maintaining services.

“When (the residents) wake up in the morning, we still have to serve them breakfast,” he said. “We can't tell them, `Well, we don't have a cook anymore.”'

A union that represents more than 5,000 nurses, licensed practical nurses and respiratory therapists said it was pleased with the decision.

“As he acknowledged, the minister simply didn't have the choice, given the fragile state of the system, but to make this responsible decision,” Claire Montour, president of the Federation de la Sante du Quebec, said in a news release, adding that the union would continue encouraging its members to get vaccinated.

Health workers are also facing pressure from their professional orders. The orders that regulate doctors, nurses and licensed practical nurses said Wednesday their members will have until Nov. 15 to get vaccinated or lose their ability to practise.

Meanwhile, health officials reported 512 new cases of COVID-19 Wednesday and seven more deaths attributed to the novel coronavirus. Hospitalizations rose by seven, to 298. There were 75 people in intensive care, an increase of three patients compared with the prior day.