A major intersection in Chinatown has reopened following a four-alarm fire that broke out at a commercial building Wednesday morning.

The intersection of Spadina Avenue and Dundas Street was shut down for hours because of the fire, but reopened at around 4 p.m.

Firefighters responded to the second floor of a building in the busy neighbourhood shortly before 10 a.m. and arrived to find smoke and flames.

Crews initially entered the building to try and fight the fire offensively, but at around 11:30 a.m., Toronto Fire Chief Matthew Pegg said crews switched to a defensive strategy due to thick smoke and high heat inside the building.

“That is a result of some excessively unsafe conditions in the building,” Pegg told CP24 at the scene

He said firefighters moved from inside the building to fight the fire from the outside.

“The transition from offensive to defensive indicates that there is a significant volume of fire that we’re dealing with and it seems that generally speaking, the structure inside the building has been deemed to be unsafe.”

He said crews were also working hard to make sure that the fire didn’t spread.

“We’ve got buildings that are literally adjoined and very close together,” Pegg said.

At around 1 p.m., Pegg said the fire was under control.

Toronto Fire said that 17 trucks and 65 firefighters responded to the fire. The initial call was for a two-alarm fire, but by 12:30 p.m. the call had been upgraded to a four-alarm incident.

One firefighter was checked over by paramedics, as a precaution, but was deemed to be alright. No other injuries were reported.

Firefighters could be seen climbing up to the roof of the building at the scene.

“We’re attempting to make access holes in the roof and vent some of the heat and smoke,” Pegg said earlier.

TTC crews removed overhead streetcar wires so that more aerial trucks could be brought in to combat the fire.

Pegg said thick smoke inside the building made it difficult for crews to locate the seat of the fire.

In addition to the heat and smoke, Pegg said the freezing rain made it challenging for crews to tackle the fire due to slips.

“The volume of ice and snow that’s on the street and on the road is hampering our ability to respond,” Pegg said.

He said the freezing rain is coating ladders and aerial equipment in ice.

It’s not yet clear how the fire started or what’s inside the building. A hazardous materials team was at the scene as a precaution.

“I have no indication yet as to how the fire started – origin or circumstances,” Pegg said.

Toronto Fire investigators were at the scene and the Office of the Fire Marshall has been notified of the fire, Pegg said.

Crews work to put out a three-alarm fire at Spadina Avenue and Dundas Street in Toronto's Chinatown area Wednesday February 6, 2019. 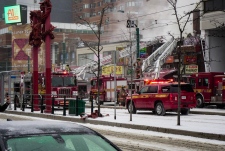