Rob Ford returns to hospital for new round of chemo 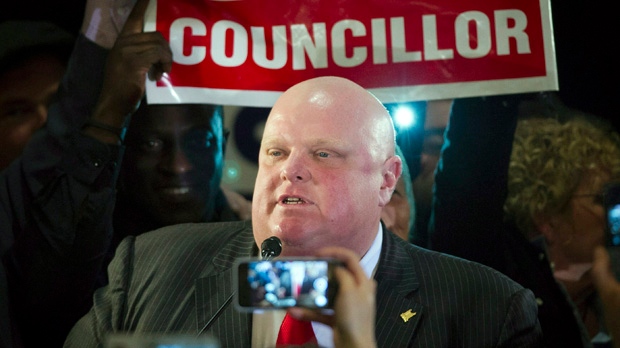 Toronto Mayor Rob Ford speaks to supporters after winning his seat on city council in Toronto on Monday, October 27, 2014. Ford says a cancerous tumour in his abdomen has not shrunk after two rounds of chemotherapy, and he will need another round. THE CANADIAN PRESS/Darren Calabrese

Mayor Rob Ford will be returning to Mount Sinai Hospital today to start a new round of chemotherapy.

Last week, Ford said he had been informed by doctors that his previous treatments had not been successful in shrinking his cancerous tumour. However, he said he was also told that his tumour had not grown in size. He said he expects to undergo three to five more rounds of chemo.

The  mayor also says he is on "a heavy dose" of antibiotics to treat his pneumonia.

Ford was diagnosed with liposarcoma, a rare soft-tissue cancer, in September, prompting him to drop out of the city’s mayoral race. Ford opted to run for a council seat in Ward 2 instead and successfully defeated his rival candidates in last week’s election.

Ford will remain in the mayor’s chair until mayor-elect John Tory is sworn in this December.