Rock slide ruled out: No cause yet for bus crash that killed three near glacier 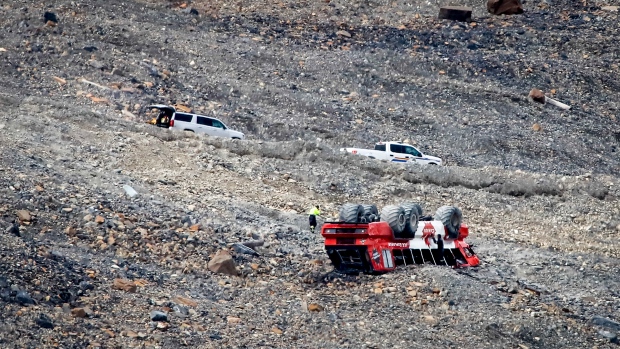 COLUMBIA ICEFIELD, Alta. - RCMP say no cause has been found yet for a tourist bus rollover near a glacier in Jasper National Park that killed three people and injured 24, although a rock slide has been ruled out.

Mounties on Monday remained at the Columbia Icefield between Banff and Jasper with a collision reconstructionist, occupational health and safety personnel, Parks Canada, and removal crews.

“Efforts are currently underway to remove the Ice Explorer vehicle,” RCMP said in a news release. “However, it may take several days.

“The removal of the vehicle is a large undertaking due to the challenges involved with the area where it came to rest. The RCMP must also protect the physical integrity of the vehicle pending its examination as part of this investigation.”

The red-and-white, big-wheeled buses regularly take tourists up a rough rocky road onto the Athabasca Glacier. On Saturday, the off-road vehicle carrying 26 passengers, plus the driver, slid about 50 metres down a steep embankment and came to a stop on its roof near the glacier.

Police said a collision reconstructionist has found no evidence that a rock slide caused the crash.

“Our understanding is that operator was experienced in that setting,” he said.

Di Nino said the driver's family is requesting privacy and no further details are being released.

“This accident hits home for thousands of transit workers across the country who take passenger safety seriously,” the union said in a statement.

The president of the company that runs the tours with a fleet of 22 buses said Sunday that changes will be made, if necessary, once it's known what went wrong.

“We started right away to review what happened, what is our process with our protocol at every step,” said Dave McKenna of the Banff Jasper Collection by Pursuit.

McKenna said the Ice Explorers are off-road vehicles and seatbelts are not required. The buses aren't allowed on highways and have a top speed of 40 km/h.

Tours have been offered on the glacier since 1969 and the Ice Explorers have been used since the early 1980s, but are constantly upgraded, McKenna said.

“We average about 480,000 visitors a year and we've been operating these vehicles since the early '80s. We've had over 16 million passengers safely taken out onto the ice over all these years,” he said.

“Nothing serious with fatalities or critical injuries.”

Most of Canada's national parks, including Banff and Jasper, reopened to visitors in early June after being shut down as the COVID-19 pandemic took hold.

The mountain parks are typically flooded with international visitors at this time of year but, with the pandemic shutting down most international travel, officials have encouraged all Canadians to explore their national parks this summer while respecting provincial public health rules.

Some of the more popular sites in the two national parks have been getting busier in recent weeks.

Highway 93 North, also known as the Icefields Parkway, remained open, but drivers were being asked to stay clear of the collision area so police and emergency workers could manoeuvre.

This report by The Canadian Press was first published July 20, 2020

- By Colette Derworiz in Edmonton and Lauren Krugel in Calgary. With files from Bill Graveland