Scheer and Trudeau accuse each other of distracting from their records 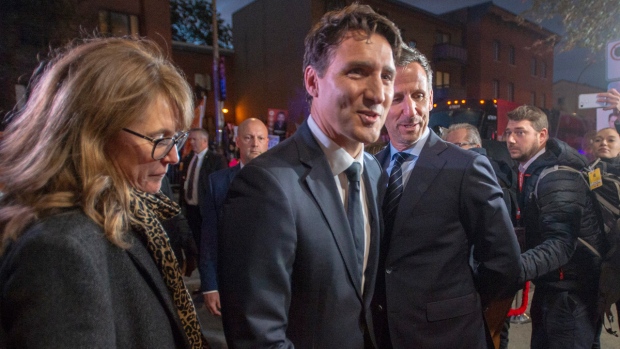 OTTAWA - Both the Liberal and Conservative leaders faced attacks Thursday that target the cores of their characters, as each accused the other of trying to distract voters from his record.

Conservative Leader Andrew Scheer said he does not expect the Liberals to stop talking about his views on abortion, even after he decided Thursday to state explicitly for the first time during the federal election campaign that he is personally against abortion.

“It's a historic Liberal strategy, that when a Liberal government was dealing with scandal and corruption, it tried to sow fear among Canadians. It tried to divide Canadians with false attacks,” said Scheer, who has been highlighting the SNC-Lavalin affair in his argument that Trudeau cannot be trusted.

“So, I expect Justin Trudeau to continue to sow fear and division among Canadians,” Scheer said in Upper Kingsclear, N.B., when asked if he thought sharing his personal beliefs about abortion would put the matter to rest.

The Liberals spent years, notably during the 2004 and 2006 federal election campaigns, accusing then Conservative leader Stephen Harper of harbouring a hidden agenda on things like abortion and same-sex marriage.

That theme returned when Trudeau, New Democrat Leader Jagmeet Singh and Yves-Francois Blanchet of the Bloc Quebecois all pushed Scheer to clarify his personal stance on abortion at the French-language debate hosted by Quebec private television network TVA on Wednesday night.

They demanded to know whether supports women's having the right to choose to end their pregnancies.

Scheer did not answer the question about his personal views on stage, and he has evaded such questions since before the election campaign began.

On Thursday, Scheer decided to elaborate, while arguing he has been upfront about his position since he first ran for office 15 years ago. That includes during the Tory leadership race that saw many social conservatives vote for him after Brad Trost, a vocal abortion opponent, fell off the ballot.

“I am personally pro-life, but I have also made the commitment that as leader of this party, it is my responsibility to ensure that we do not reopen this debate, that we focus on issues that unite our party and unite Canadians,” he said.

“That is exactly what I will do and that is why I will vote against measures that attempt to reopen this debate.”

Later on Thursday, the Globe and Mail reported Scheer holds dual American-Canadian citizenship through his father, who was born in the U.S.

Brock Harrison, a spokesperson for the Conservative campaign, said in a statement that Scheer told the U.S. Embassy this summer that he was renouncing his American citizenship, something he decided to do after winning the leadership race in 2017. He is waiting for the embassy to confirm the process is complete, Harrison said.

Harrison said Scheer has never voted in any U.S. election.

Scheer was pressed to clarify his stance on abortion this summer after it emerged that his Quebec lieutenant, Alain Rayes, had told candidates in the province that backbench MPs would not be allowed to bring forward any bills or motions on the issue.

That goes against party policy, which created confusion until Scheer, a practising Catholic who has voted in favour of restricting abortion rights in the past, said he would oppose any attempt to revive the issue in the House of Commons.

As prime minister, Trudeau required all Liberal MPs to vote with his government on matters of reproductive health, and would-be candidates for his party are asked during the nomination process whether that would be a problem.

Trudeau, who is also a practising Catholic, told The Canadian Press last month that he disagrees with what the Catholic Church teaches about abortion. Before he became Liberal leader, he had said that he was personally against abortion, but believed women had the right to make their own choices.

Singh said Scheer should have elaborated on his position sooner.

“The fact that he said it today, but he didn't say it during the debate when asked directly, certainly shows a lack of courage,” Singh said in Toronto.

Trudeau, meanwhile, accused the Conservatives of trying to distract from their own record on climate change by making hay out of the fact that the Liberals have two campaign planes - one for passengers and one for cargo.

Scheer had brought it up during the debate on Wednesday night, calling Trudeau a hypocrite on the environment.

The Liberals said the campaign is buying carbon offsets for greenhouse-gas emissions the planes produce, and did the same for two planes in 2015.

“What we're seeing here from the Conservatives is a classic and desperate attempt to distract from the fact that they have zero approach on climate change - don't even think it's important,” Trudeau said Thursday in Montreal.

“It's a well-established far-right tactic to try and discredit environmentalists and people who actually want to fight the environment, by distracting.”

The Liberals pointed to the example of a Fox News segment on U.S. Sen. Jim Inhofe, a Republican from Oklahoma, who called out people he described as hypocrites on climate change, such as those who fly to climate conferences instead of holding meetings via Skype.

They also took the opportunity to highlight similar arguments made by controversial right-wing Canadian media outlet The Rebel, which the Liberals noted was linked to Hamish Marshall, who is managing the 2019 Conservative campaign. Marshall cut ties with The Rebel in 2017.

With another major debate behind them, the federal party leaders were scattering across the country Wednesday.

They are all hoping that when the dust settles after the French-language debate, they will have broken out of the stasis the polls keep showing, despite three weeks of each party working hard to convince Canadians to support them in the Oct. 21 election.

Trudeau stayed in Montreal, where he met with local candidates and supporters. Scheer took his campaign to Atlantic Canada, with stops in New Brunswick and Nova Scotia.

Singh was Toronto, returning to areas where he is hoping to take seats back from Liberals after an extended sojourn in British Columbia.

The Greens' Elizabeth May and the People's Party's Maxime Bernier were also their respective home turfs - May on Vancouver Island and Bernier in Quebec's Beauce region.

Next week the leaders have two more debates, these organized by the new federal debates commission.

This report by The Canadian Press was first published Oct. 3, 2019.

Conservative Leader Andrew Scheer is seen in front of a Canadian flag as he speaks to the media following a campaign rally in Dartmouth, N.S., on Thursday, October 3, 2019. THE CANADIAN PRESS/Jonathan Hayward

NDP Leader Jagmeet Singh arrives for the leaders debate accompanied by his wife Gurkiran in Montreal on Wednesday, Oct. 2, 2019. THE CANADIAN PRESS/Paul Chiasson