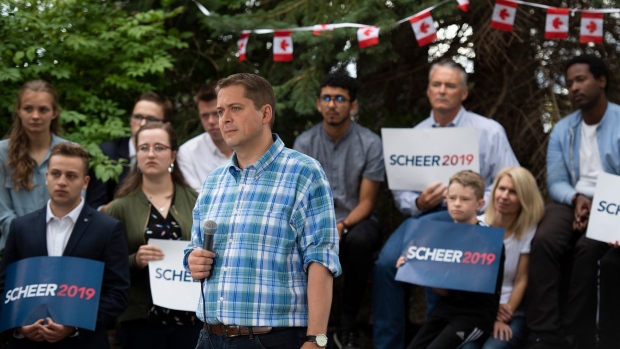 Conservative leader Andrew Scheer listens to questions during a campaign event in Ottawa on Saturday, Sept. 14, 2019. Scheer decided against taking a break from campaigning on the first weekend of the election campaign. THE CANADIAN PRESS/Justin Tang

Scheer had a wide-ranging chat with reporters on an overnight flight to Vancouver Sunday in a bid to put his campaign back on solid footing following another day of message trouble delivered by Liberal researchers digging up dirt on Tory candidates.

Since Thursday morning, the second day of the campaign, Scheer has fired one candidate and defended four others for comments about abortion, transgender rights and Muslims as well as homophobic slurs, almost all of them after social media posts and online videos were unearthed by Liberal researchers.

The candidate who was shown the door in Winnipeg North had secret social media accounts on which he expressed racist viewpoints, that he did not tell the Conservative Party about when he applied to be a candidate -- something expressly forbidden when candidates apply for nominations.

But Scheer is standing behind four other candidates, including one whose social media posts critical of transgender rights and Muslims and often meandering into strange conspiracy theories, were enough to keep the Ontario conservative party from allowing her to run for them in the last provincial election. He said as long as people are willing to own up to their wrongs and apologize he doesn't see why they should have to be disqualified from seeking public office.

Ghada Melek, the candidate for Mississauga-Streetsville who was denied a chance to run for the provincial conservatives in Ontario, issued a written apology for anti-Muslim comments and posts she made on social media, saying she understands now they are offensive.

"I think we all have to acknowledge the fact that people can make mistakes and people can own up to that," Scheer said, though he added that decisions would be made on a case by case basis.

But Scheer said what he wants to talk about and what Canadians care more about than Liberal mudslinging, is Liberal leader Justin Trudeau's record.

He pointed to a report in the Globe and Mail Saturday which suggested Trudeau gave up a lot of concessions to Trump when NAFTA was renegotiated last year.

"It's very clear that in the last few hours Donald Trump just ran the table on him and spoon fed him concession after concession and he just capitulated and took it all because he had left himself in such a weak position," Scheer said.

He accused Trudeau of not delivering on his promise of a better deal.

"If he had been honest with Canadians, and said 'listen I'm going to do my best against Donald Trump but I'm not that confident that I can get anything back in return, I'm going to protect as much as I can,' I think people would understand that," said Scheer. "But he went down there and said he was going to get a better deal. There is nothing in this new deal that is better off than when he left."

Scheer said the resulting deal is a disaster for auto workers and dairy farmers in particular who now have quotas and export restrictions they never had before.

However, despite his complaints about the accord, Scheer said he would still work to ratify it because not doing so would create havoc for the Canadian economy.

"I believe what is best now for the Canadian economy is to take what we've got and then try to improve upon it," he said. "We will do everything we can to improve upon what he has left us with without reopening the entire deal, because I will acknowledge that that would create a tremendous amount of uncertainty for our economy."

The Conservative leader did not specify what improvements he would try to make to the trade deal.

Scheer is campaigning in British Columbia Sunday, first in a Liberal-held riding in Surrey, and then in two NDP-held ridings on Vancouver island.