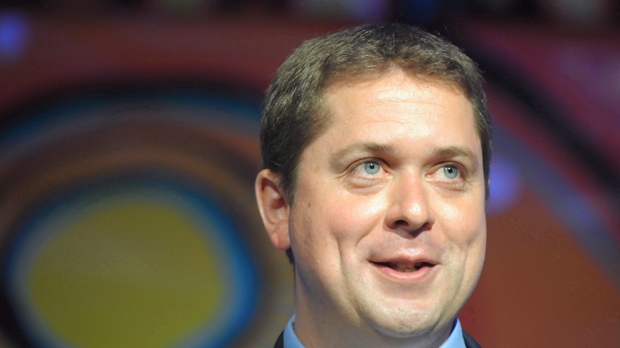 Conservative Party leader Andrew Scheer, right, speaks during the opening of the Assembly of First Nations annual general meeting in Regina, Sask., Tuesday July 25, 2017. Rest and relaxation might top the agenda for most Canadians right now but newly-minted Conservative Leader Scheer is going full-tilt on the barbecue circuit in a bid to introduce himself and boost his party's prospects before 2019.THE CANADIAN PRESS/Mark Taylor

OTTAWA -- A spokesman for Conservative leader Andrew Scheer says his promise to yank federal funding from universities that fail to uphold free speech wouldn't apply to a decision by the University of Toronto to ban a nationalist rally from campus.

Scheer made the free speech pledge during his bid for leadership of the party earlier this year and repeated it during his victory speech after he was elected in May.

He said it was about trying to counter the ability of small groups to shut down campus events they don't agree with.

While Scheer hadn't articulated how that would work, the university's recent decision to reject a Canadian Nationalist Party event put the idea to the test.

The Canadian Nationalist Party platform claims that the founding peoples of Canada, which it describes as being of European descent, are being suppressed.