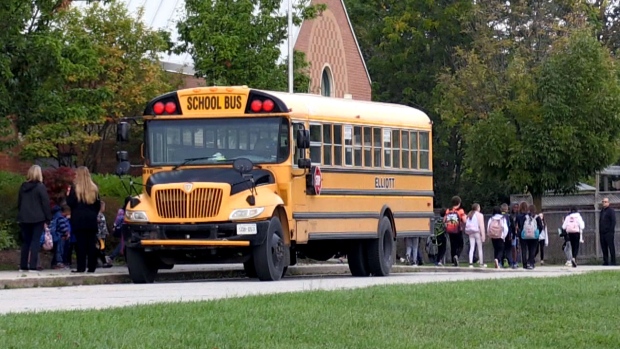 A shortage of school bus drivers has resulted in delays of more than an hour on some routes and officials say that it could take months to fully address the issue.

So far, the driver shortages have not resulted in any routes being cancelled outright.

But Kevin Hodgkinson, who manages school bus transportation for Toronto’s public and catholic boards, tells CP24.com that about two to three per cent of the overall school bus fleet in the city doesn’t have a driver assigned to it at this point.

There are about 45,000 public school students that take school buses each day in Toronto.

Hodgkinson said that the driver shortages appear to be a “systematic issue” and are affecting all seven of the companies that are contracted to provide school bus transportation in Toronto.

He said that while there were discussions about cancelling some buses over the summer, a decision was ultimately made to instead have some drivers take on additional routes after they drop students off.

That is resulting in delays that range anywhere from 10 minutes to more than an hour, he said.

“Some parents are frustrated with us because they're not getting the communication. So for us, you know, we're continuing to work with our operators to make sure that that communication piece is first and foremost,” he said. “We understand the driver shortage will create delays and we really can't do anything about that. But we can make sure that we can communicate with our families. So we've been pushing that message to our carriers.”

Parents were first warned about the likelihood of driver shortages over the summer and were then formally notified that “there will not be enough drivers to cover all routes” in a letter sent out by the Toronto Student Transportation Group on Sept. 7.

Hodgkinson, TSTG’s general manager, said that providers are still supposed to notify parents through an online portal about delays so that they can make their own decision about whether to have their child wait for the bus and miss the start of school, or find alternate transportation.

In some cases, he said, students in Grade Four and up can also be placed in a taxi provided by the school bus company but only with their parents’ consent.

“There's an expectation that each week we will be picking away a little bit at a time to knock the numbers down to ensure that we get to a point where they have a driver in every seat and enough spare drivers to cover off sick days,” he said of the delays. “That’s the goal in terms of the next few weeks to the next few months, to be honest, in terms of how long we think this may go on for.”

Industry has long struggled with recruitment

School bus delays as a result of driver shortages are, of course, nothing new in Toronto.

In fact, in 2016, the delays were so significant that Ontario Ombudsman Paul Dubé launched an investigation, later finding that the TDSB and TCDSB failed “to heed early warning signs that dozens of bus routes had no drivers” and “did not adequately warn parents.”

Debbie Montgomery is the president of Unifor Local 4268, which represents drivers with Stock Transportation.

She tells CP24.com that the industry has long struggled with the recruitment and retention of skilled workers due to low wages, inflexible working hours and a lack of benefits.

But she said that the problems appear to be compounded this year by the departure of many causal and semi-retired workers during the pandemic and the failure to bring on new workers to take their place.

“I call it a cancel culture. If a driver needs to be away for a day for a medical appointment or anything they just cancel routes (due to the staff shortages),” she said. “It is really hard on parents. I have grandparents who ride the bus and I know their parents are constantly checking where is the bus now but that doesn’t help much if you have a job to get to and you are late three days a week.”

In addition to school bus driver shortages, there have also been crossing guard shortages reported in several Ontario municipalities this September.

Last month, the Township of Scugog in Port Perry said that two school crossings would not be staffed to start the year due to labour shortages and that there would be no substitute crossing guards available to fill in for the time being.

The situation is better in Toronto, but a spokesperson did tell CP24.com this week that one of its two vendors has only been able to staff 98.8 per cent of crossings. The other is maintaining a coverage rate of 100 per cent.