Security video shows no interaction between Richey, Schlatter inside bar hours before her death 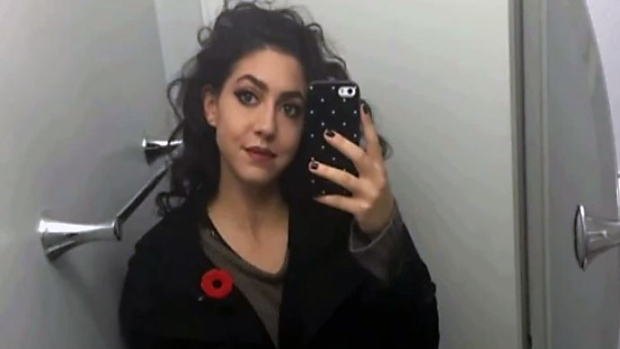 Tess Richey appears in this undated photo. Richey's body was found a few days after she went missing in the Church and Wellesley neighbourhood.

Tess Richey did not look up from her phone as the man accused of murdering her brushed past her inside a crowded bar on the last night she was seen alive, security video screened in a Toronto courtroom showed.

At the murder trial for 23-year-old Kalen Schlatter on Tuesday, Det. Stephen Matthews returned to the stand to go over security footage captured from inside and outside Crews and Tangos, the Church Street bar where Richey went to drink and dance on the night of Nov. 24, 2017.

Security video recorded that night showed Schlatter already inside the bar when Richey arrived solo at around midnight.

In the video, Richey is seen grabbing a pint and staring at her phone for several minutes as she waits for her friend Ryley Simard to arrive.

At one point, security video shows Schlatter quickly manoeuvering around Richey as he walks to another part of the bar. Richey does not glance up from her phone as Schlatter walks by and the two do not appear to make any eye contact. 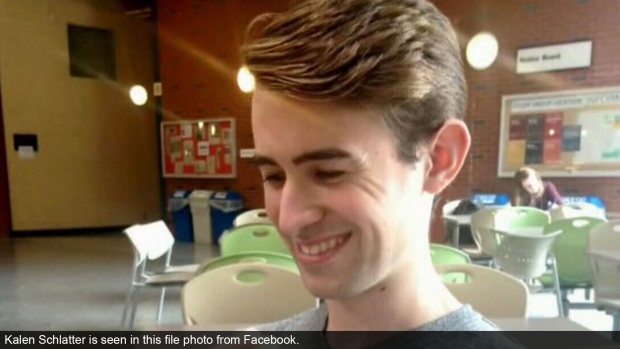 The security video shown in court on Tuesday documented the movements of Schlatter, Richey, and Simard at the bar throughout the night.

Richey and Simard are seen moving from room-to-room on the first and second floor of the building and dancing together on a packed dance floor.

In one video clip viewed by the jury, Schlatter is spotted outside the bar on the sidewalk chatting for several minutes with a group of people.

In all of the video clips shown in court on Tuesday, Richey and Simard are never seen interacting with Schlatter and the three are rarely seen in the same part of the bar at the same time.

When Crown prosecutor Beverley Richards asked Matthews if Richey and Schlatter were ever captured on camera “grinding and making out,” Matthews responded “No.”

Schlatter has pleaded not guilty to first-degree murder in Richey's death, which is believed to have occurred just hours after she left the bar.

The jury previously heard that at the end of the night, Simard had a brief exchange with Schlatter outside Crews and Tangos and the three later ordered hot dogs at a nearby hot dog stand before stopping to chat with a woman outside a home on Dundonald Street.

The Crown previously told the court that when Richey and Simard parted ways after their night out, a security camera captured Schlatter and Richey walking down a laneway toward the exterior stairwell of a house under construction in the area of Church and Dundonald streets, the same stairwell where Richey’s body was discovered days later.

Her cause of death was determined to be “neck compression” and the Crown previously said that Schlatter’s semen and saliva were found on Richey’s clothing.

The trial resumes on Wednesday morning at 10 a.m.