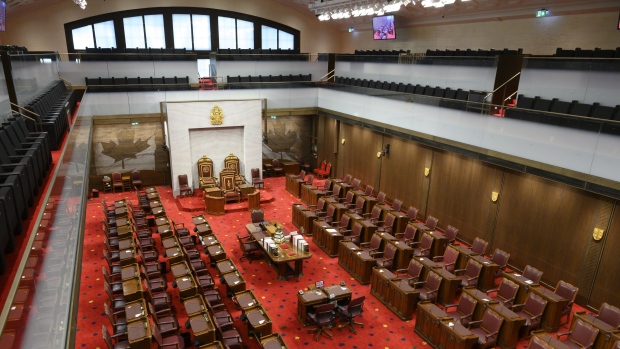 The Senate of Canada building and Senate Chamber are pictured in Ottawa on Monday, Feb. 18, 2019. (CANADIAN PRESS / Sean Kilpatrick)

OTTAWA - Senators overwhelmingly approved Wednesday a bill to expand access to medical assistance in dying with amendments that would relax access even more than proposed by the government.

A revised version of Bill C-7 was passed in the Senate by a vote of 66-19, with three abstentions.

The bill is intended to extend eligibility for assisted dying to people whose natural deaths are not reasonably foreseeable, in compliance with a 2019 Quebec Superior Court ruling.

But senators approved five amendments, two of which would expand access even more.

One amendment would allow people who fear losing mental capacity to make advance requests for an assisted death.

Another would impose an 18-month time limit on the bill's proposed blanket ban on assisted dying for people suffering solely from mental illnesses.

Until that exclusion on mental illness is lifted, senators also approved another amendment to clarify that it would not apply to people suffering from neurocognitive disorders such as Alzheimer's disease.

They further amended the bill to require the government to collect race-based data on who requests and receives assisted dying and to establish a joint parliamentary committee within 30 days of the bill receiving royal assent to review the assisted dying regime in Canada.

The revised bill will now be sent back to the House of Commons for MPs to determine whether to accept or reject some or all of the amendments.

Justice Minister David Lametti's office had no immediate comment on the amended version of the bill.

As the Liberals hold only a minority of seats in the Commons, at least one of the main opposition parties will need to support whatever the government decides to do with the amendments.

The Conservatives and NDP have signalled that they're unlikely to support the Senate amendments. Bloc Quebecois Leader Yves-Francois Blanchet has said they “deserve to be looked at” but has expressed reluctance to go along with changes proposed by an unelected chamber that he considers illegitimate.

Should some or all of the amendments be rejected, senators will have to decide whether to acquiesce to the will of the elected chamber or dig in their heels.

Because they are appointed, senators typically defer to the will of the elected chamber. However, some believe they have a duty to stand firm when fundamental constitutional rights are at stake.

Theoretically, the bill could ping-pong repeatedly between the two chambers until the matter is resolved.

The government wants the bill passed by Feb. 26, the thrice-extended court-imposed deadline.

The vast majority of senators have been clear that they believe the mental illness exclusion violates the right of individuals to equal treatment under the law, regardless of physical or mental disability, as guaranteed in the Charter of Rights and Freedoms.

Should the Commons reject the Senate's proposed 18-month time limit on that exclusion, senators could yet propose another amendment to refer the matter to the Supreme Court.

Most of the senators who voted against the bill Wednesday oppose easing access to assisted dying. They have echoed the criticism of disability rights groups that the bill discriminates against people with disabilities, sending a message that their lives are not of equal value.

However, some, like Conservative Sen. Claude Carignan, voted against it because they don't think the bill, even with the amendments, goes far enough to ease access.

Sen. Brent Cotter, a member of the Independent Senators Group, said he supported the amended version of the bill but abstained in the final vote to protest the government's failure to commit more funding to improve the living conditions of vulnerable Canadians.