Shooting in north Etobicoke sends one man to hospital

One man has been transported to a trauma centre with serious injuries after being shot in north Etobicoke.

It happened in the Turnvale Road and Alicewood Court area shortly before 8:30 p.m.

The circumstances surrounding the shooting were not immediately known.

According to police, the victim was shot in the torso. He was transported to hospital with serious, but non-life-threatening injuries.

No suspect information was immediately provided by police. 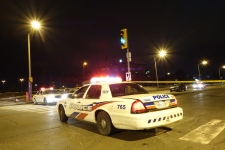 A Toronto police cruiser is pictured in this file photo. (CP24/Tom Podolec)