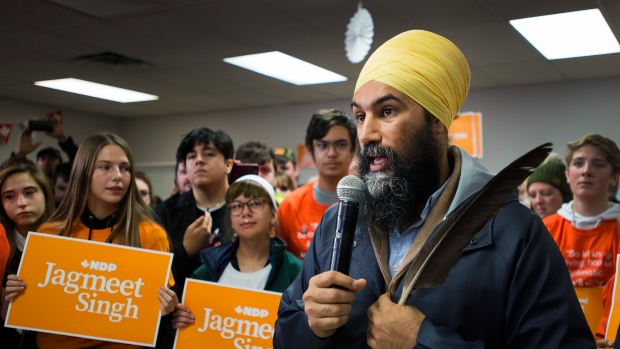 NANAIMO, B.C. -- Jagmeet Singh encouraged voters not to fall for what he says are Liberal scare tactics and instead cast their ballots for the New Democrats with confidence as he sought to continue building momentum in the final days of the election campaign.

The Liberals have spent much of the campaign warning Canadians against voting for the NDP or Greens, arguing that to do so would split the progressive vote and let the Conservatives, who have promised to eliminate the carbon tax and cut federal spending, take power.

Opinion polls have suggested that while the Justin Trudeau's Liberals and Andrew Scheer's Conservatives are neck and neck with only days left until election day on Oct. 21, many progressive voters remain undecided on who to support.

But Singh pushed back against the Liberals while campaigning on Vancouver Island on Friday, where New Democrats hold most of the seats and remain popular and where oppositon to the Trudeau government's decision to the purchase the Trans Mountain oil pipeline is strong.

"Mr. Trudeau's going to tell you that you don't have a choice in this election, that you have to vote out of fear," Singh said during a campaign stop in Port Alberni, B.C., before leaving for a rally in Victoria.

Singh accused the Liberals of having helped "big polluters" and pharmaceutical companies rather than Canadians by purchasing the Trans Mountain pipeline and unfinished expansion work for $4.5 billion last year and negotiating new intellectual property rules for brand-name drugs.

He also doubled down on his refusal to work with a Conservative minority government under any circumstances, which he cited as a key difference between the NDP and Greens under leader Elizabeth May, whose riding includes the southern tip of Vancouver Island.

While the NDP leader at one point apologized for saying this week that he "doesn't respect Conservatives," he was nonetheless adamant that he could not work with the Tories.

While Singh has indicated he would work with a minority Liberal government, he continued to dance around whether he would make cancelling the Trans Mountain pipeline expansion a condition for that support, saying only that he was opposed to the project.

This report by the Canadian Press was first published Oct. 18, 2019.