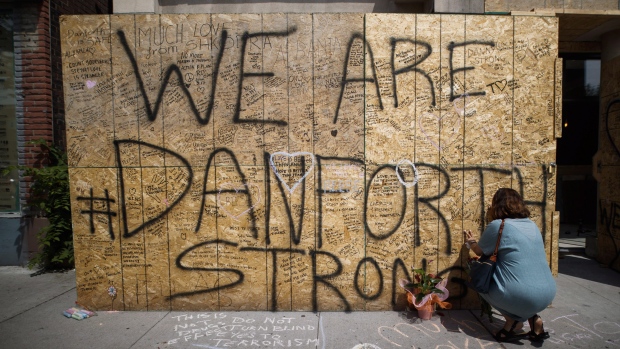 A woman writes a message on a makeshift memorial remembering the victims of a shooting on Sunday evening on Danforth Avenue, in Toronto on July 24, 2018. THE CANADIAN PRESS/Mark Blinch

TORONTO - Arguing that the use of smart technology in gun manufacturing could have prevented a deadly mass shooting in Toronto's Greektown will take a proposed class action launched on behalf of the victims into uncharted legal territory, a lawyer for the families said Tuesday.

Malcolm Ruby, the lawyer spearheading the proposed suit against Smith & Wesson filed on behalf of victims of the 2018 Danforth shooting, said the focus on technology represents an argument that can never be tested in American courts and has not been explored in Canadian ones.

“I don't think a case like this has ever been before a Canadian court,” he said. “There are lots of product liability cases, but as far as gun cases and gun safety issues like this are concerned, this is a new kind of case.”

The suit, filed on behalf of all those affected by the shooting that killed two people and injured 13 others last July, alleges Smith & Wesson was negligent for not including technology that would have prevented the weapon from being used by anyone but its authorized owner. Such technology ensures the gun can only be fired once unlocked with the registered owner's fingerprint or a chip imbedded in a wristband worn by the user.

According to police, Faisal Hussain opened fire along a bustling stretch of the Danforth using a M&P40 recently stolen from a Saskatchewan arms dealer, causing carnage and chaos before turning the gun on himself.

Ken Price, whose daughter Samantha was injured in the shooting, has signed on as one of the plaintiffs in the proposed class action. He said the fate that befell those killed and injured in the attack raises fundamental questions around gun design.

“It dawns on people: why isn't there a road map to gun safety around the design of a weapon,” Price said. “Why is it easier to pick up a gun and shoot it then it is to pick up somebody else's smartphone and use it? It doesn't make sense.”

That argument is bunk, said Tony Bernardo, a firearms rights advocate and executive director of the Canadian Shooting Sports Association, who called the proposed suit a public relations stunt.

“I don't see how you can hold a company responsible for the misuse of one of its products,” he said. “If that's the case, they'd be suing Ford or General Motors every time somebody drove impaired and killed someone.”

Erik Knutsen, an associate dean of law at Queen's University who has expertise in civil liability and has been involved in lawsuits against gun manufacturers, says the smart technology argument is likely to run afoul of strict Canadian product liability laws that may make the proposed suit hard to win.

Knutsen said the United States has a law on the books that shields gun manufacturers from both civil and criminal liability if the weapons they produce cause harm or damage. But, he said, that law was created in response to broad product liability laws that otherwise leave companies on the hook for any harm caused by their products. Without that broad exemption, Knutsen said, American gun manufacturers would be unable to do business.

“In Canada we're actually giving the manufacturer far more protection than the U.S. We say, 'you are only responsible if your conduct in making that product falls below that of what we think a reasonable manufacturer of that thing would do,”' he said. “I have to prove, as a hurt person, that you acted worse than the average manufacturer.”

Ruby argued Smith & Wesson's own history may work against them in this case.

The company signed a deal with the White House in 2000 in which it agreed to incorporate safety measures, including smart technology preventing the gun from being fired by anyone but the owner, into its products.

It met with severe backlash from the American pro-gun lobby, some of which ultimately contributed to the departure of the company's chief executive and a loss of market value.

The company since backed off those plans and, according to the proposed lawsuit, made the type of gun used in the Danforth shooting in 2005.

According to a statement to shareholders released earlier this year, Smith & Wesson's parent company has no intention of revisiting the issue.

“The Company's reputation as a strong defender of the Second Amendment is not worth risking for a vague goal of improving the Company's reputation among non-customers or special interest groups with an anti-Second Amendment agenda,” the statement said. “(The company's) customer base of knowledgeable, law abiding firearms purchasers does not blame Smith & Wesson, or any other firearms brand, for the malfeasance of criminals or the actions of the mentally or emotionally impaired.”

Ruby sees such an about-face as a critical aspect of his case, which has not yet been tested in court.

“It's significant because Smith & Wesson knew there were problems with their handguns that they were being diverted and used to kill or injure people,” he said. “That agreement they signed it shows they knew.”

Smith & Wesson did not respond to repeated requests for comment on the proposed class action.

This report by the Canadian Press was first published Dec. 17, 2019.