KAMLOOPS, B.C. - One member of the Canadian Armed Forces has died and another is injured after a Snowbird plane crashed in a residential area of Kamloops, B.C., on Sunday while on a cross-country tour meant to impart hope during the COVID-19 pandemic.

Capt. Jenn Casey, a public affairs officer with the Canadian Forces, died in the incident, the Department of National Defence said Sunday night.

Capt. Richard MacDougall, the pilot of the aircraft, was being treated for his injuries that the Snowbirds said are not life-threatening.

“Canadians look at the Snowbirds as a source of joy and an exhibition of the incredible feats that our people in uniform are capable of,” Minister of National Defence Harjit Sajjan said in a statement.

“Operation Inspiration was intended to lift the spirit of Canadians at this difficult time and the Snowbirds accomplished their mission. I know that all Canadians grieve this tragic loss.” 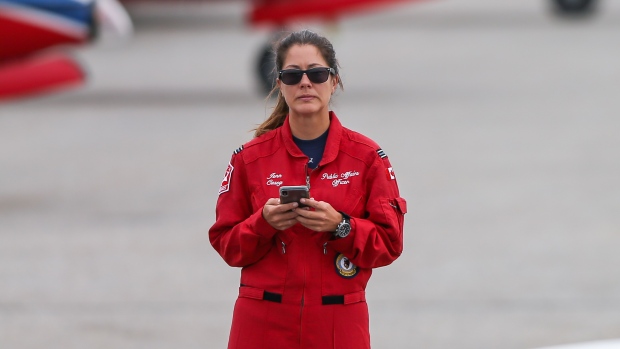 Capt. Jenn Casey is seen in this image. Photo by: Greg Kolz

Tim Durkin, who worked with Casey at Quinte Broadcasting in Belleville, said they became fast friends when she joined the station in 2013.

“She just jumped right into the community and was involved with it,” he said. “Just somebody that when she walked into a room, she just made you smile. She was a great person and a great friend as well.”

Durkin said she loved hockey - particularly the Montreal Canadiens - and they attended the world junior hockey championship together three years ago in Montreal.

Casey's roots were in Nova Scotia - a province that's been ravaged by tragedy in the past month.

Under the spectre of the COVID-19 pandemic, a gunman killed 22 people in rural parts of the province, and a military helicopter from the Halifax-class frigate HMCS Fredericton went down over the Mediterranean Sea, killing six people - three of whom were from Nova Scotia.

“Now they lose one of their own daughters,” Durkin said. “It's something that the whole country reels with, but Nova Scotia in particular is going to be hit hard now.” 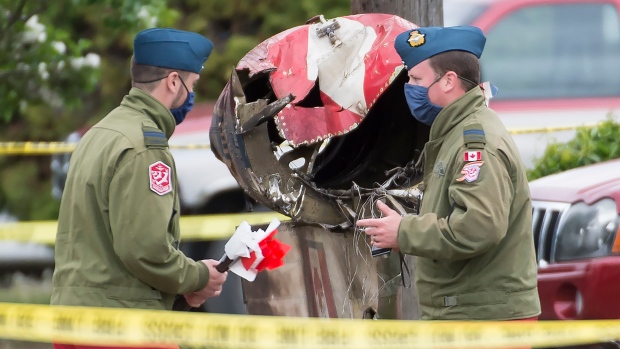 The crash sent neighbours pouring onto the street where they said debris was scattered and a house was on fire.

Kenny Hinds, who lives seven doors down from the crash site, said it looked like the living room of the house where the crash occurred was on fire.

“I just started running down the street. And I got there maybe a minute after it crashed and there was a couple of residents that had their hoses out and they were trying to put the flames out because it hit a house,” he said. “It looked like most of it landed in the front yard, but maybe a wing or something went through the roof.”

Kamloops Mayor Ken Christian said the military is sending a team to investigate the incident. He said the Snowbirds remain in Kamloops, and the city and airport are offering as much help as possible to the team. 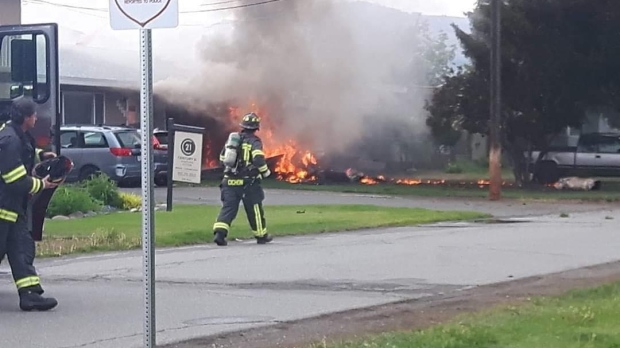 Sunday's crash happened the same day the Snowbirds were scheduled to make a trip from Kamloops to Kelowna as part of Operation Inspiration, aimed at boosting the morale of Canadians struggling with the COVID-19 pandemic.

“For the past two weeks, the Snowbirds have been flying across the country to lift up Canadians during these difficult times,” Prime Minister Justin Trudeau said in a statement. “Every day, they represent the very best of Canada and demonstrate excellence through incredible skill and dedication.”

He said his thoughts are with Casey and MacDougall's families, as well as the entire Snowbirds team.

I have been in touch with @HarjitSajjan about the @CFSnowbirds crash in Kamloops, BC. My thoughts are with the brave members of the @RCAF_ARC. The CAF will provide an update as soon as possible.

One of the aircraft subsequently climbed into the sky before rolling over and plunging to the ground. The video appears to show at least one person ejecting from the plane before it disappears behind a stand of trees and an explosion is heard.

Hinds had been watching the aircraft after hearing them take off, and said he was able to see the crash.

“I heard 'bang, bang,' and just as I looked before it left my view from the house beside me, I saw the Snowbird going straight down,” he said. 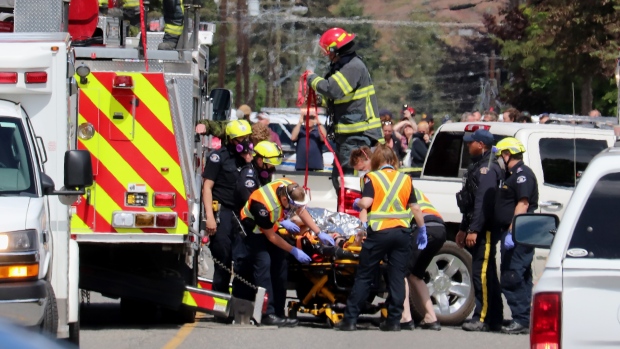 First responders transport an injured person on a stretcher at the scene of a crash involving a Canadian Forces Snowbirds aircraft, in Kamloops, B.C., Sunday, May 17, 2020. THE CANADIAN PRESS/Castanet Kamloops, Brendan Kergin

Rose Miller lives directly across the street from where the plane hit. She'd watched the Snowbirds arrive on Saturday, and went to her front window when she heard the roar of jet engines.

Miller said she heard a loud bang and wondered whether it might be a sonic boom. Then she watched the plane smash onto the ground.

“It just exploded. It went everywhere,” she said. “In fact, I got a big huge piece in my backyard. The cops said it was the ejection seat.”

Miller said a couple in their early 70s lives in the home. Both are OK, she said, noting she'd spoken with them after they were evacuated to a nearby street.

The woman had been in the basement while the man was behind the house. 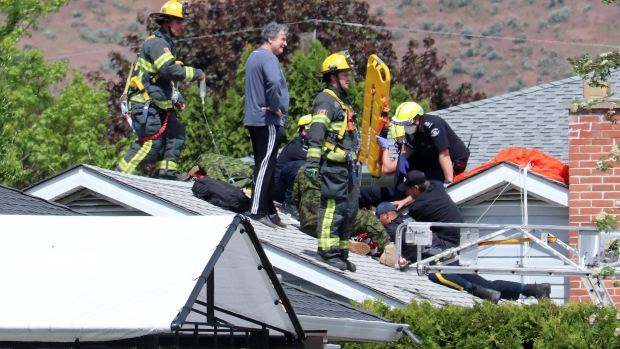 First responders attend to a person on a rooftop at the scene of a crash involving a Canadian Forces Snowbirds aircraft, in Kamloops, B.C., Sunday, May 17, 2020. THE CANADIAN PRESS/Castanet Kamloops, Brendan Kergin

Sunday's crash follows the downing of another Snowbird in the U.S. state of Georgia last October, where the team was scheduled to perform in an air show.

Capt. Kevin Domon-Grenier sustained minor injuries when he ejected from the plane, which crashed into a farmer's field. No one else was hurt.

A preliminary report on last year's Snowbird crash blamed engine failure, though military investigators had yet to identify the cause of the problem.

The Snowbirds have performed at air shows across Canada and the U.S. for decades and are considered a key tool for raising awareness about - and recruiting for - the air force. Eleven aircraft are used during shows, with nine flying and two kept as spares.

The air force obtained its Tutor jets in 1963 and has used them in air demonstrations since 1971. Prior to Sunday's crash, seven pilots and one passenger had been killed and several aircraft had been lost over the course of the Snowbirds' history.

This report by The Canadian Press was first published May 17, 2020.

- with files from Brenna Owen in Vancouver, Rob Drinkwater in Edmonton, Nicole Thompson and Salmaan Farooqui in Toronto and Lee Berthiaume in Ottawa.

It is with heavy hearts that we announce that one member of the CF Snowbirds team has died and one has sustained serious injuries. We can confirm that we have contacted all primary family members of those involved. More information will be communicated in the near future.