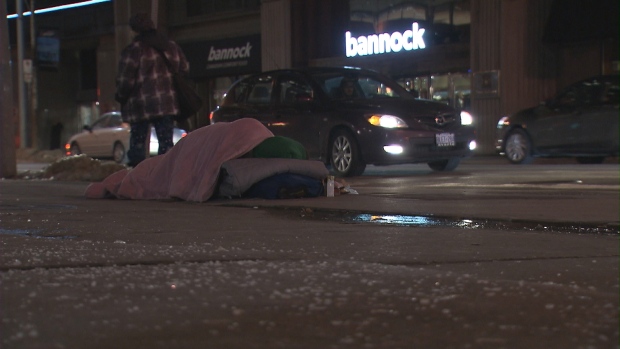 A group of 30 non-profit organizations and agencies is calling on the city to open an emergency shelter to help accommodate homeless Torontonians who have been denied entry to existing shelters that are already at capacity.

In an open letter released on Tuesday, the groups asked Mayor John Tory to push for the opening of the Moss Park and Fort York armories or “facilities of equivalent size” as emergency shelters in order to ensure that nobody is left out in cold.

“While we all agree that longer-term solutions are necessary, and long overdue, to chronic and episodic homelessness, we cannot let the current lack of enough affordable and supportive housing in our city keep us from action that could save lives this winter,” the letter states.

The city maintains a monthly target of 90 per-cent occupancy for its shelter system, however in recent years the actual occupancy-rate in the shelter system has exceeded that.

The open letter said that overcrowding at city shelters has become an “urgent issue,” that needs to be addressed.

The City of Toronto currently has space for 4,612 people in its shelter systems.

That number includes space for 520 people at local motels, which the City of Toronto made available following the deaths of two homeless people two years ago.

Tory has not yet responded to the open letter.

The letter was signed by a variety of organizations, including Social Planning Toronto.