Spirit of Albertans during floods is what makes Canada great: Harper

OTTAWA -- Celebrating the past achievements of Canada has always been a staple of the national Canada Day celebrations on Parliament Hill.

But this year more recent triumphs were also feted: the down-to-earth pluck of Albertans coping with recent floods and the around-the-Earth exploits of astronaut Chris Hadfield.

Both were honoured by the stars and dignitaries taking part in the annual noon show, cheered on by an estimated 80,000 people attending the event.

Prime Minister Stephen Harper said those in Alberta set an example for all Canadians.

"When floods forced so many from their homes, communities dug deep, neighbours helped neighbours and people sheltered complete strangers," Harper said in his speech.

"That's the spirit that makes Canada the best country in the world. The best, bar none."

The spirit came alive in the form of Tucker Densmore of Halifax and Adrian Thow of Brampton, Ont. who were a hit in the Parliament Hill crowd, covered from head to toe in red and white face paint, Canada flags draped on their backs like capes.

Families that happened upon them had their pictures snapped with the colourful pair.

"My big wish for Canada is just to keep living the great life we live, just a great multicultural society and we're just so fortunate to live here in Canada," said Thow.

Anastase Rouli, who moved to Canada from Rwanda 24 years ago, took in the midday show with his wife and three daughters.

"It's a peaceful and multicultural state, and Canada is one of the best countries in the world, so it makes me happy to be here," Rouli said.

The Parliament Hill noon event featured a performances by Terri Clark, Carly Rae Jepsen, Marie-Mei and Metric, as well as live coverage of celebrations in New York and London.

But the biggest cheers came for Chris Hadfield.

Hadfield's photographs of Canada taken from his perch aboard the international space station earlier this year earned him fans around the world.

He rocketed further upwards in many's estimation by recording a song while in space that he performed on Monday.

Governor General David Johnston said Canada Day is about celebrating the contributions of Hadfield, Albertans and all Canadians.

"We have so much talent, so much creativity, so much ingenuity. So I challenge you this year to do and give what you can, to make our country smarter and more caring, fairer and more just, stronger and more united."

The support that Canadians have offered to flood-ravaged Alberta prompted Premier Alison Redford to publicly thank them in a video.

"Thank you so much from the bottom of our hearts," Redford said in the video. "Whether it's Red Cross volunteers from Newfoundland, social workers from Guelph (Ont.), dog trainers from Kelowna (B.C.) who provided food for search and rescue dogs, the important time and money Canadians poured into the Red Cross to help us rebuild."

"On this Canada Day we are so grateful to be part of a Canadian community," she added.

Organizers of Canada Day festivities in Canada said thousands joined the celebrations at Fort Calgary, the site where the North West Mounted Police built their fort in 1875, laying the foundations for the future city.

Located at the confluence of the Bow and Elbow rivers, the fort remained dry even though there was severe flooding all around it.

Sara Gruetzner, Fort Calgary CEO, said many of the people who came to the fort thanked staff for going ahead with Canada Day celebrations and welcomed the break from cleaning out their flood-damaged homes.

"It's pretty hard when you live in a big city to feel like you're part of a community. But I think Calgarians are a pretty tight bunch tight now," said Gruetzner, whose own home ended up with a basement full of water.

Officials in Calgary warned residents away from river banks as viewing locations for the nightly fire-works show as water levels are still high.

On Sunday, police said a man was nearly swept into the Elbow River after a section of riverbank collapsed underneath him, sending him tumbling right to the swirling water's edge.

As rain fell on the Halifax celebrations, Alberta's flood woes were also on people's minds there.

Don Parker had travelled from Sexsmith, Alta., to celebrate Canada Day in the Nova Scotia capital.

"Whether it's raining or sunshine or flooding in Alberta, you know, Canada is where I want to live," said Parker.

"It means having the freedom to travel all over Canada and meet all these great people and see all this wonderful country, in the rain of course," he said, laughing.

Claude Brunelle, 57, said he'd one day like to celebrate Canada Day outside his home town of Vancouver.

He said he's heard good things about the parties in both Ottawa and England and perhaps will go to one, once he's retired.

But for this year, he gave his all for the Vancouver event, showing up in red pants, a Canadian flag around his neck, an Air Canada fanny pack around his waist, and a shirt, socks and hat each adorned with a maple leaf and red earmuffs, despite 25-degree heat.

"It's my favourite holiday of the year -- it's better than Christmas," said Brunelle, 57.

"I've been in Canada all my life; I just love Canada." 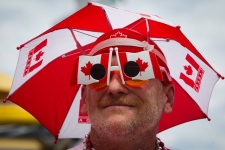