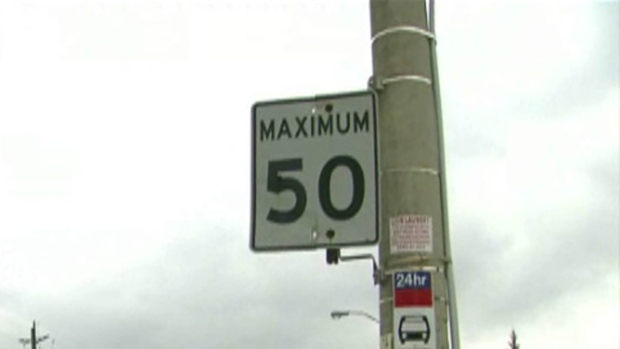 Speed limits could be lowered on dozens of arterial roads across Toronto as part of the second phase of the city’s Vision Zero pedestrian safety plan.

A staff report that will be considered by the city’s infrastructure and environment committee next week recommends that the speed limit be lowered from 60 km/h to 50 km/h on 41 stretches of road as part of Vision Zero 2.0.

The staff report also recommends that the speed limit be reduced from 50 km/h to 40 km/h on five other arterial roads that have been designated as pedestrian safety corridors.

The arterial roads that would be in line to have their speed limits lowered are largely clustered in the city’s east end and include portions of Finch Avenue, Eglinton Avenue, St. Clair Avenue, Victoria Park Avenue and Warden Avenue, among others.

“There is a strong rationale that reducing operating speeds, particularly on arterial roadways, will result in the greatest reduced risk of serious injury and fatality for all road users especially those who are more vulnerable,” Mayor John Tory said during a press conference at the Scarborough Civic Centre on Thursday morning. “Arterial roads are 21 per cent of all the roadways but represent 83 per cent of all the fatalities and serious injuries. This is just about connecting the dots. Where we have the wider roads with longer stretches between intersections and higher speed limits until now, we have also had a significant number of these collisions and fatalities.”

This would come after the city already reduced the speed limit along 151 kilometres of arterial roads as part of the first phase of Vision Zero.

The staff report points out that a reduction in speed of approximately five per cent has proven to reduce fatalities by about 20 per cent. Furthermore, the report says that pedestrians have a 95 per cent chance of dying when hit by a vehicle travelling 60 km/h but that probability goes down to 30 per cent when if the vehicle is instead travelling at 40 km/h.

“One of the main principles of Vision Zero is that road users make mistakes and collisions are always likely to happen, however no one should die or sustain serious injury as a result of such mistakes. At high speeds, road user mistakes can prove to be deadly,” the report notes.