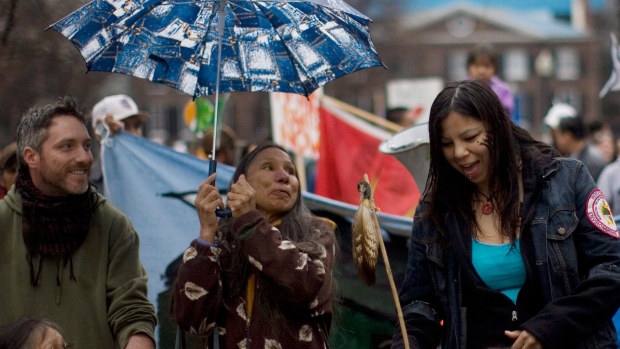 Demostrators gather as they prepare to march during a protest in Toronto on Wednesday April 7, 2010 to highlight demands for the restitution for mercury poisoning which is claimed to be affecting the health of the community in Grassy Narrows, Ontario. THE CANADIAN PRESS/Chris Young

TORONTO - A northwestern Ontario First Nation plagued with mercury poisoning for more than 50 years says it has evidence that toxic material is still leaking from an upstream mill.

Chief Simon Fobister of Grassy Narrows says a new report released today suggests there is ongoing mercury contamination from the Dryden, Ont., paper mill, which was decommissioned decades ago.

The researchers behind the report say that mercury levels downstream of the plant should have returned to normal by now in the absence of leaks.

But they say their tests show significantly higher levels downstream of the plant compared with upstream locations.

The community, near the Manitoba border, has dealt with mercury poisoning since the mill dumped 9,000 kilograms of the substance into the Wabigoon and English River systems during the 1960s.

But mercury concentrations haven't decreased in 30 years and dangerous levels are still present in sediment and fish, causing ongoing health and economic impacts in the community.