Study says few workers have paid leave, qualify for EI if off job due to COVID-19 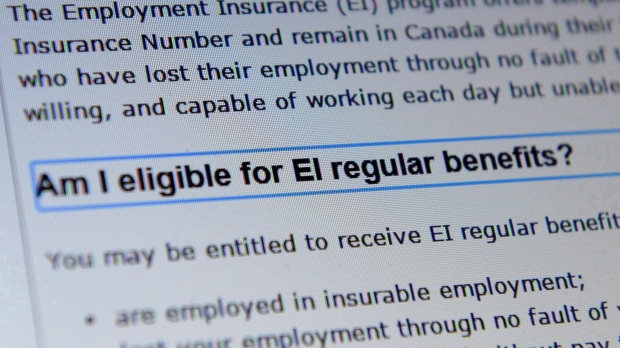 Canada Service centre documents that display Employment Insurance options are pictured in Ottawa on Tuesday, July 7, 2015. Newly released research says broad swaths of the Canadian workforce won't have access to paid leave by their employers or existing federal help should they be forced off the job due to COVID-19. THE CANADIAN PRESS/Sean Kilpatrick

OTTAWA - New research says broad swaths of the Canadian workforce won't have access to paid leave from their employers or existing federal help should they be forced off the job due to COVID-19.

The research note from the Canadian Centre for Policy Alternatives says 38 per cent of sickness leave and 23 per cent of family leave of more than a week was covered by employers in 2019.

About three-quarters of workers in higher-paying jobs had time off covered by their employers, while just over 10 per cent of workers in the lowest income decile received a similar benefit last year.

[MORE: How EI benefits for COVID-19 quarantines will work]

The report says further complicating issues is that the most unemployed workers didn't qualify for employment insurance benefits in 2018, the most recent numbers of available.

David Macdonald, the centre's senior economist, says most of the workers who could use financial assistance can't easily work from home right now, meaning closed schools, self-isolation or quarantine will mean lost shifts and plummeting incomes.

He says the federal government will likely have to create an emergency benefit for workers who can't access EI benefits as part of an economic response package Finance Minister Bill Morneau is to unveil this week.